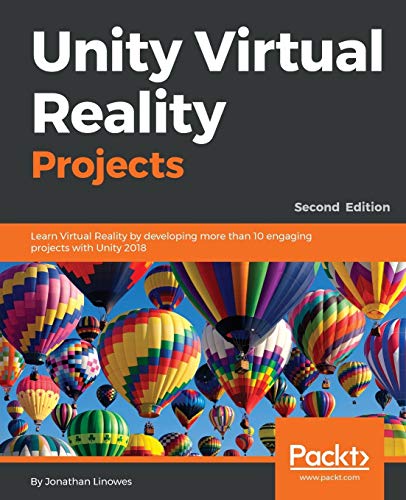 If you are interested in Virtual Reality, want to learn how it works, and want to create your own VR experiences, this book is for you. We walk you through a series of tutorials and in-depth discussions using the Unity game engine.

Unity has become the leading platform for building virtual reality games, applications, and experiences for this new generation of consumer VR devices.

Unity Virtual Reality Projects walks you through a series of hands-on tutorials and in-depth discussions on using the Unity game engine to develop VR applications. With its practical and project-based approach, this book will get you up to speed with the specifics of VR development in Unity. You will learn how to use Unity to develop VR applications that can be experienced with devices such as Oculus, Daydream, and Vive. Among the many topics and projects, you will explore gaze-based versus hand-controller input, world space UI canvases, locomotion and teleportation, software design patterns, 360-degree media, timeline animation, and multiplayer networking. You will learn about the Unity 3D game engine via the interactive Unity Editor, and you will also learn about C# programming. By the end of the book, you will be fully equipped to develop rich, interactive VR experiences using Unity.

What you will learnWho this book is for

If you're a non-programmer unfamiliar with 3D computer graphics, or experienced in both but new to virtual reality, and are interested in building your own VR games or applications, then this book is for you. Any experience in Unity is an advantage.

Jonathan Linowes founded Parkerhill Reality Labs, an immersive media indie studio and is the developer of the BridgeXR toolkit, Power Solitaire VR game, and the upcoming Chess Or Die game. He is a VR/AR evangelist, Unity developer, entrepreneur, and teacher. Jonathan has a BFA from Syracuse University and an MS from the MIT Media Lab. He held technical leadership positions at Autodesk and other companies. He authored Unity Virtual Reality Projects (first edition 2015), Cardboard VR Projects for Android (2016), and Augmented Reality for Developers (2017), all published by Packt.
Table of Contents
CIN000664860
9781788478809
1788478800
Unity Virtual Reality Projects: Learn Virtual Reality by developing more than 10 engaging projects with Unity 2018, 2nd Edition by Jonathan Linowes
Jonathan Linowes
Used - Very Good
Paperback
Packt Publishing Limited
2018-05-24
492
N/A
Book picture is for illustrative purposes only, actual binding, cover or edition may vary.
This is a used book - there is no escaping the fact it has been read by someone else and it will show signs of wear and previous use. Overall we expect it to be in very good condition, but if you are not entirely satisfied please get in touch with us
Trustpilot