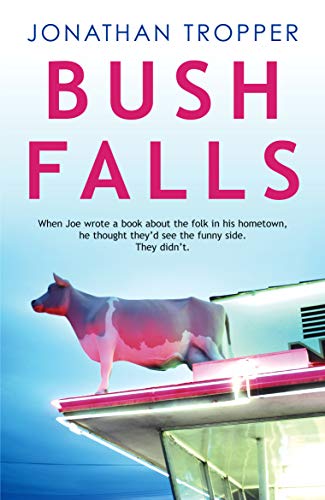 In Stock
$19.49
Joe Goffman's vicious first novel has savaged the reputation of Bush Falls. But the more Bush Falls resents Joe, the more it becomes obvious that Joe cannot turn his back on Bush Falls.
Very Good
7 in stock

Joe Goffman's vicious first novel has savaged the reputation of Bush Falls. When a family emergency summons him back to the town he left 17 years ago, he's not surprised at the welcome he receives: milk-shakes thrown in his face, copies of his novel pelting his house and violent threats to blow up his shiny new Mercedes. But the more Bush Falls resents Joe, the more it becomes obvious that Joe cannot turn his back on Bush Falls. As he walks along the familiar streets, memories return to haunt him with a vengeance -- about a secret love affair, an old friendship and a tragic death. Now, decades later, Joe has to face his past without resorting to his pen. And with the help of some very old friends, he might just be able to learn something -- if he manages to survive his homecoming. At once hilarious and bittersweet, Bush Falls is a tale of the double-edged rewards of fame, revenge and redemption as a writer takes on a village and the ghosts of his past.

"Tropper's novel is one to savour ... Consistently funny, full of sharp observations, sophisticated. You won't have heard of Jonathan Tropper before, but keep an eye on him. He's good" * The Mirror *
"A beautifully crafted book of enormous heart, humility, wit, honesty and vulnerablilty. Utterly magnificent" -- Augusten Burroughs, author of Running With Scissors
"An immensely readable tale of success, revenge and small-town disappointment" * Marie Claire *

Jonathan Tropper attended the creative writing program at New York University Graduate School of Arts and Science, where he received a Masters degree, and his novels Plan B, Bush Falls and, most recently, Everything Changes (Heinemann, June 2005) have been translated into more than ten languages. Bush Falls is currently in developement at Warner Brothers and Everything Changes at Sony Pictures. Jonathan lives with his wife and two children in Westchester, New York where he is currently working on a new novel. Visit his website at www.jonathantropper.com.

GOR001239279
Bush Falls by Jonathan Tropper
Jonathan Tropper
Used - Very Good
Paperback
Cornerstone
2005-05-05
368
0099461234
9780099461234
N/A
Book picture is for illustrative purposes only, actual binding, cover or edition may vary.
This is a used book - there is no escaping the fact it has been read by someone else and it will show signs of wear and previous use. Overall we expect it to be in very good condition, but if you are not entirely satisfied please get in touch with us.