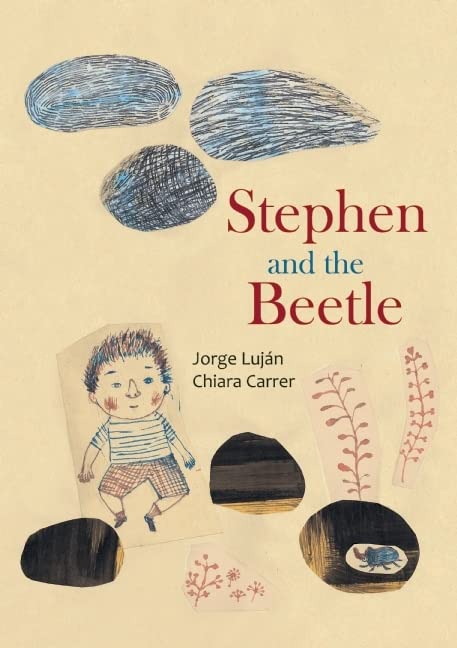 Stephen and the Beetle
by Jorge Elias Lujan

Used Price
$5.99
Free Shipping in the US
Stephen attempts to squish a beetle but has second thoughts.
Reviews:
Trustpilot
Very Good

Stephen and the Beetle Summary

Stephen and the Beetle by Jorge Elias Lujan

When Stephen spots a beetle he takes off his shoe and raises his arm, ready to strike... but then he has second thoughts. He lays his head down on the ground and the beetle walks right up to him. At the last moment the beetle turns aside and each can go on with the day, having avoided the worst.

In this very simple story Jorge Lujan presents the kind of deep moral questions that can occur even in the smallest child's day. Chiara Carrer's very original etched and painted illustrations perfectly complement the story, and are in and of themselves beautiful works of art.

Customer Reviews - Stephen and the Beetle

Stephen and the Beetle Reviews

Praise for Colors! !Colores!:
"The imagery in both words and pictures is often richly original . . . A lovely book to share, reflect upon and linger over." Kirkus Reviews
A 2012 New York Times Best Illustrated Book

Jorge Lujan is an author, poet, musician, and architect who has a gift for finding the very best illustrators from all over the world and collaborating with them to create exceptional children's books. His very accessible poetry for children can be found in Con el sol en los ojos / With the Sun in My Eyes, illustrated by Morteza Zahedi, Doggy Slippers, illustrated by Isol, Colors! !Colores!, illustrated by Piet Grobler, and Rooster/Gallo, illustrated by Manuel Monroy. He has also written an ambitious retelling in verse of the myths in Wagner's Ring Cycle, Brunhilda and the Ring, illustrated by Linda Wolfsgruber. Lujan has garnered many excellent reviews and awards for his work, including the Premio de Poesia para Ninos de ALIJA (IBBY Argentina). His music for children can be found at www.myspace.com/jorgelujaninfantil and his website at www.jorgelujan.com. Born in Argentina, he now lives in Mexico City.

Chiara Carrer is one of Italy's best-known children's book illustrators. She has been creating children's books for more than twenty years, with more than one hundred titles to her credit. Carrer has won many major awards, including the UNICEF Prize, the Austrian Kinder und Jugendbuchpreis, the BolognaRagazzi New Horizons (Special Mention) and the Golden Apple at the Biennial of Illustration, Bratislava. She also teaches art and has exhibited her work in Europe, Japan, and Brazil. She lives in Rome.

CIN000405889
Stephen and the Beetle by Jorge Elias Lujan
Jorge Elias Lujan
Used - Very Good
Hardback
Groundwood Books Ltd ,Canada
2012-08-09
36
1554981921
9781554981922
N/A
Book picture is for illustrative purposes only, actual binding, cover or edition may vary.
This is a used book - there is no escaping the fact it has been read by someone else and it will show signs of wear and previous use. Overall we expect it to be in very good condition, but if you are not entirely satisfied please get in touch with us.