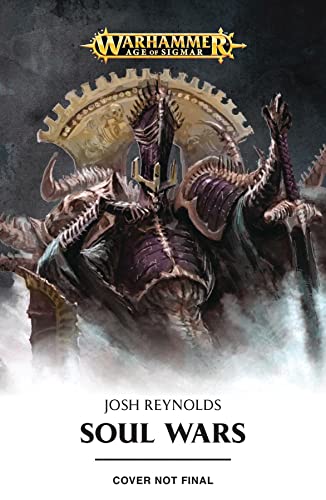 Used Price
$22.99
Free Shipping in the US
Nagash revives an ancient grudge with the God-King Sigmar as a ferocious new war between the living and the dead shakes the Mortal Realms.
Reviews:
Trustpilot
Very Good

Nagash revives an ancient grudge with the God-King Sigmar as a ferocious new war between the living and the dead shakes the Mortal Realms.

The Mortal Realms tremble with unending war. In Shyish, the Realm of Death, an ancient evil stirs, sensing opportunity. Nagash, the Undying King and God of Death, sets his gaze upon the citadels of the living and the servants of Sigmar, the God-King of Azyr. Allies once, joined together against the machinations of the Ruinous Powers, the two gods now find themselves enemies. Nagash, burning with the need to avenge an ancient slight, calls forth his soulless legions to sweep across the realm he claims as his own and reassert death's dominion over all things, as the War of Heaven and Death begins anew.

In addition to numerous Warhammer 40,000 novellas and short stories, Josh Reynolds is the author of the Fabius Bile series - beginning with the novel Primogenitor - and the Primarchs novel Fulgrim: The Palatine Phoenix. For the world of Warhammer fantasy, he has written the End Times novels The Return of Nagash and Lord of the End Times, the Gotrek & Felix novels Road of Skulls and The Serpent Queen, and the Time of Legends novels Neferata and Master of Death. He has also written a number of stories set in Warhammer's new Age of Sigmar fantasy setting, including the Stormcast Eternal novels Black Rift and Plague Garden, and the first in the Eight Lamentations series, Spear of Shadows. He lives and works in Northampton, England.

CIN000405802
Soul Wars by Josh Reynolds
Josh Reynolds
Soul Wars
Used - Very Good
Hardback
Games Workshop
2018-06-30
320
1784966878
9781784966874
N/A
Book picture is for illustrative purposes only, actual binding, cover or edition may vary.
This is a used book - there is no escaping the fact it has been read by someone else and it will show signs of wear and previous use. Overall we expect it to be in very good condition, but if you are not entirely satisfied please get in touch with us.