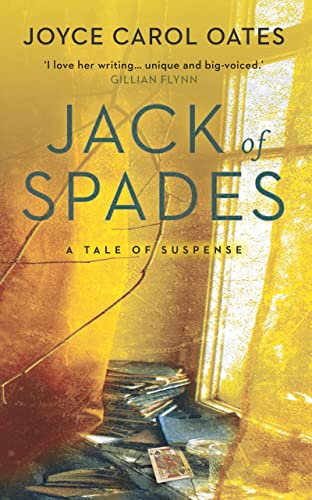 When a successful writer is accused of plagarism his life - and sanity - begins to unravel.

From one of the most highly regarded writers of her generation, JACK OF SPADES is a psychologically complex thriller that examines the fine line between genius and madness.

Andrew J. Rush is a successful mystery writer with twenty-eight novels to his name. He has a loving wife, three grown children, and is well-known in his small New Jersey town for his charitable work.

But Andrew J. Rush is hiding a dark secret. Under the pseudonym Jack of Spades, he has penned another string of novels - dark tales of murder, lust and madness.

When a court order arrives accusing him of plagarism, Rush fears his secret may be exposed. And unbidden, in the back of his mind, the Jack of Spades starts plotting his survival.

'Oates is simply the most consistently inventive, brilliant, curious and creative writer going, as far as I'm concerned' Gillian Flynn.
'A writer of extraordinary strengths' Guardian.
'If the phrase 'woman of letters' existed, Joyce Carol Oates would be, foremost in this country, entitled to it' John Updike.

Joyce Carol Oates is the author of over 70 works and the winner of a host of prizes including the National Book Award and a Guggenheim Fellowship. Oates is Professor of the Humanities at Princeton University.

GOR010713908
Jack of Spades by Joyce Carol Oates
Joyce Carol Oates
Used - Very Good
Paperback
Head of Zeus
2015-05-21
224
1784970980
9781784970987
N/A
Book picture is for illustrative purposes only, actual binding, cover or edition may vary.
This is a used book - there is no escaping the fact it has been read by someone else and it will show signs of wear and previous use. Overall we expect it to be in very good condition, but if you are not entirely satisfied please get in touch with us.