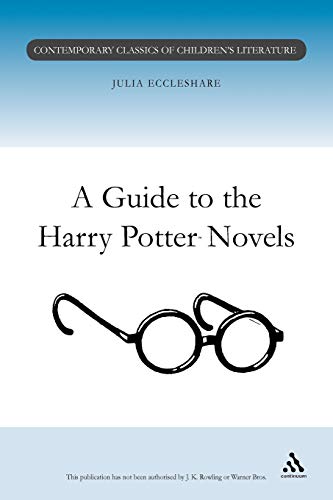 A Guide to the Harry Potter Novels
by Julia Eccleshare

Used Price
$14.99
Free Shipping in the US
This study looks at J.K. Rowling's books and considers some of the reasons for their phenomenal success. This is done against a backdrop of how Harry Potter relates to other contemporary children's books so that students and teachers can place them in the context for which they were written.
Reviews:
Trustpilot
Very Good Good

A Guide to the Harry Potter Novels Summary

A Guide to the Harry Potter Novels by Julia Eccleshare

JK Rowling now is half-way through a series which has taken the world by storm. Unusually, she has attracted success both in terms of massive sales figures and critical acclaim. This study will look at her books and consider some of the reasons for their phenomenal success. This will be done against a background of how Harry Potter relates to other contemporary children+as books so that students and teachers can place them in the context for which they were written.This book has not been authorized by JK Rowling, her agent, or Warner Bros.

Customer Reviews - A Guide to the Harry Potter Novels

A Guide to the Harry Potter Novels Reviews

"a thoughtful introduction to the phenomenon that began in 1997 with the publication of Harry Potter and the Philosopher's Stone"
Children's Literature Association Quarterly, Winter 02-03

Julia Eccleshare is children's books editor of the Guardian (one of the UK's top broadsheets). She has written on children's books for 25 years and regularly appears on BBC programmes and in "The Bookseller." One of her reviews provided blurb for the first paperback edition of "Harry Potter."

Part 1 Introduction: brief background to major success in children's books - Blyton, Just William, Tolkien, R.L. Stine, Roald Dahl - reflect different models that work; HP titles have something of all of these about them because of the different genres they straddle; Part 2 What is Harry Potter?: how it is written - the unlikely place of a boarding school story at the end of the 20th century, the construction of the stories with their emphasis on complex plotting, the concept of a group of characters who are growing up, the sense of place, the use of magic and its relationship to the powers of darkness; the imaginative genius and the moments of weakness; what it is saying about - racial tolerance/equality, the importance of family/friends/loyalty, the nature of power, the role of education; Part 3 Beyond the story, why is Harry Potter so much more successful than anything else?: the particular qualities of HP; the ability to speak directly to children as readers; psychological and sociological reasons centering around child-empowerment and a specific understanding of the child's view of the world; Part 4 How was the HP phenomenon achieved?: the dominant role of HP in the last three years and the role of marketing in achieving it; the self-fulfilling effect of over-popular authors in the context of how children choose what they read; the reversing of the norm in which adults rather than children themselves are the initial selectors; Part 5 The Harry Potter effect: how writing for children may be viewed differently after Harry Potter.

GOR005204423
A Guide to the Harry Potter Novels by Julia Eccleshare
Julia Eccleshare
Contemporary classics in children's literature
Used - Very Good
Paperback
Bloomsbury Publishing PLC
2002-03-07
124
0826453171
9780826453174
N/A
Book picture is for illustrative purposes only, actual binding, cover or edition may vary.
This is a used book - there is no escaping the fact it has been read by someone else and it will show signs of wear and previous use. Overall we expect it to be in very good condition, but if you are not entirely satisfied please get in touch with us.