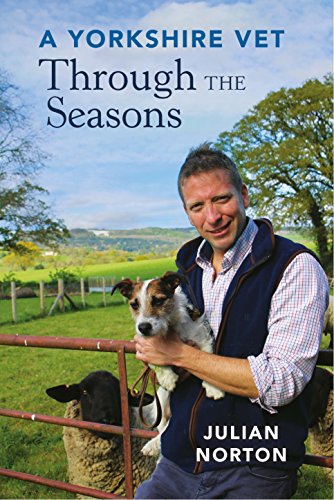 A Yorkshire Vet Through the Seasons
by Julian Norton

Used Price
$8,99
Free Shipping in the US
In A Yorkshire Vet Through the Seasons, Julian recounts more inspirational tales from his life, the animals he has treated and the people he has met. This book is an inspiration for anyone who loves animals as well as those who dream of becoming a vet.
Reviews:
Trustpilot
Very Good Good

A Yorkshire Vet Through the Seasons Summary

A Yorkshire Vet Through the Seasons by Julian Norton

Warm and heartfelt stories and amusing anecdotes from the life of a vet in God's Own County.

Julian Norton has been a vet for over twenty years, and in that time he has treated animals of every kind - snakes and lizards, fish and fowl, sheep, goats, alpacas, cows, horses, swans ... you name it, Julian has seen it and, most likely, made it better!

In A Yorkshire Vet Through the Seasons, Julian recounts more inspirational tales from his life, the animals he has treated and the people he has met, as well as taking us through the seasons, showing the challenges and surprises that occur at the most unlikely times. His voice, well known from the television series A Yorkshire Vet on Channel 5, comes over loud and clear in his writing, and the compassion and professionalism he is known for on the TV shines brightly through these pages.

Whether he's tending to a domestic pet at his practice in Thirsk or called out to an injured swan in the middle of a cold Yorkshire night, the animals always come first and Julian's passion and commitment are always to the fore. Full of drama, small triumphs, sadness and happiness, this book is an inspiration for anyone who loves animals as well as those who dream of becoming a vet.

Customer Reviews - A Yorkshire Vet Through the Seasons

Julian Norton qualified as a veterinary surgeon from Cambridge Veterinary School in 1996. He has spent most of his working life in his beloved North Yorkshire.

In 2015, Skeldale Veterinary Centre became involved with filming the Channel 5 television series The Yorkshire Vet, in which Julian has the title role.

Outside of work, Julian is a keen triathlete and ski mountaineer. He has represented team GB at age-group level for both middle-distance triathlon and long-course duathlon. He is currently training to compete in a team for the major ski mountaineering race, La Patrouille des Glaciers, which traverses the high peaks of Switzerland.

He is married to Anne, also a veterinary surgeon, and has two sons, Jack and Archie, a Jack Russell terrier called Emmy, and two guinea pigs called Sparkle and Shine.

GOR009472471
A Yorkshire Vet Through the Seasons by Julian Norton
Julian Norton
Used - Very Good
Paperback
Michael O'Mara Books Ltd
2018-08-23
256
1789290058
9781789290059
N/A
Book picture is for illustrative purposes only, actual binding, cover or edition may vary.
This is a used book - there is no escaping the fact it has been read by someone else and it will show signs of wear and previous use. Overall we expect it to be in very good condition, but if you are not entirely satisfied please get in touch with us.