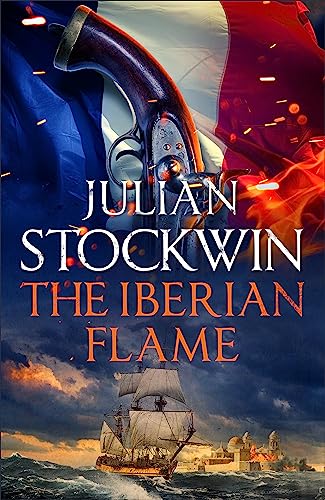 The Iberian Flame
by Julian Stockwin

Used Price
$8.39
Free Shipping in the US
Perfect for fans of Patrick O'Brian, Bernard Cornwell, and swashbuckling adventure during the great Age of Sail: The Iberian Flame will be the twentieth novel in Julian Stockwin's acclaimed Thomas Kydd series.
Reviews:
Trustpilot
Very Good

1808. With the Peninsula in turmoil, Napoleon Bonaparte signs a treaty to dismember Portugal and put his brother, Joseph, on the throne of Spain.

Meanwhile, Nicholas Renzi, the Lord Farndon, undertakes a deadly mission to stir up partisan unrest to disrupt this Napoleonic alliance with Spain.

Thrust into the crucible of the uprising, Captain Sir Thomas Kydd is dismayed to come up against an old foe from his past - now his superior and commander - who is determined to break him. Kydd will soon face the greatest decision of his professional career.

Bonaparte, incensed by the reverses suffered to his honour, gathers together a crushing force and marches at speed into Spain. After several bloody encounters the greatly outnumbered British expedition have no option other than make a fighting retreat to the coast. Only the Navy can save them.

But the flame of insurrection has been lit - and the Peninsular War has begun.

More Praise for Julian Stockwin and the Thomas Kydd Series

A stirring tale that grips the reader from the opening pages, holding the attention to the end * Fire Reviews *
The novel's prose is fast paced and engaging . . . Stockwin's considerable experience of the Navy shines through to provide informative and shrewd observations throughout. There is so much here for those who are fans of seafaring adventures, but also an excellently sustained sense of the history, politically and socially, of the period. A highly recommended swashbuckler of a novel * Literature Works *

Julian Stockwin was sent at the age of fourteen to TS Indefatigable, a tough sea-training school. He joined the Royal Navy at fifteen before transferring to the Royal Australian Navy, where he served for eight years in the Far East, Antarctic waters and the South Seas. He was awarded the MBE and retired with the rank of Lieutenant Commander. He now lives in Devon with his wife Kathy. More information can be found on his website at www.JulianStockwin.com.

GOR009520400
The Iberian Flame: Thomas Kydd 20 by Julian Stockwin
Julian Stockwin
Thomas Kydd
Used - Very Good
Paperback
Hodder & Stoughton
2018-10-18
432
1473641039
9781473641037
N/A
Book picture is for illustrative purposes only, actual binding, cover or edition may vary.
This is a used book - there is no escaping the fact it has been read by someone else and it will show signs of wear and previous use. Overall we expect it to be in very good condition, but if you are not entirely satisfied please get in touch with us.