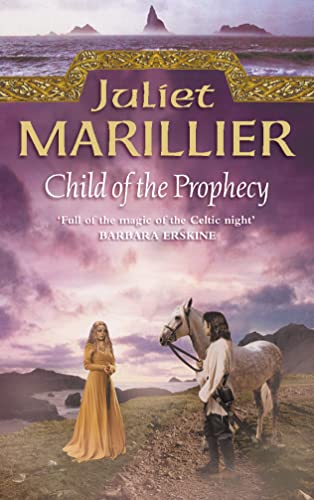 Child of the Prophecy
by Juliet Marillier

Recalling the lost Celtic past to life, this rich, magical story of loyalty and love is a new Mists of Avalon for readers of historical fantasy.

Child of the Prophecy Summary

Child of the Prophecy (The Sevenwaters Trilogy, Book 3) by Juliet Marillier

Recalling the lost Celtic past to life, this rich, magical story of loyalty and love is a new Mists of Avalon for readers of historical fantasy.

Raised in an isolated cove on the beautiful Kerry coast, Fainne's childhood is a lonely one. But her beloved father, the exiled son of Sevenwaters, teaches her all he knows of the magical arts, and every summer she looks forward to the arrival of her one friend, the gypsy boy, Darragh. Soon, though, her world will be changed for ever when her grandmother, the renowned and feared sorceress Oonagh, enters her life.

Oonagh tells Fainne that she carries the blood of a cursed line of sorcerers and outcasts, and then she burdens her with a terrible task. She sends her to the fortress of Sevenwaters, to the family Fainne has never known, to use whatever powers she can to thwart a prophecy that is near fulfilment. The Fair Folk in alliance with Sevenwaters will win back the sacred isles unless Fainne kills the child the prophecy talks of. Tormented by evil dreams, Fainne knows she has the power to do this...

Child of the Prophecy is a powerful and haunting conclusion to the Sevenwaters trilogy.

Child of the Prophecy Reviews

`A tale of subtle depth and sweetness' SFX

`Marillier is a virtuoso of emotional pain, and Fainne lives closer to the edge than any of her heroines. These are books in which life lived close to nature is central to the scheme of things, and Marillier writes of it with attractive delicacy; this is a powerful and suspenseful completion of a popular trilogy.' Roz Kaveney, Amazon

`A magical Celtic tale of conflict and loyalty ... Marillier again shows her immense skill in weaving a tapestry that will entrance the reader ... she is a storyteller of rare gifts, and this is an immensely enjoyable piece.' Starlog

Juliet Marillier was born in New Zealand and brought up in Dunedin, the `Edinburgh of the South'. She has a passionate interest in Celtic music and Irish folklore. A mother of two daughters and two sons, she lives in a rural area outside Perth in Western Australia.

GOR010631269
Child of the Prophecy (The Sevenwaters Trilogy, Book 3) by Juliet Marillier
Juliet Marillier
The Sevenwaters Trilogy
Used - Like New
Paperback
HarperCollins Publishers
2003-01-06
592
0006486061
9780006486060
N/A
Book picture is for illustrative purposes only, actual binding, cover or edition may vary.
The book has been read, but looks new. The book cover has no visible wear, and the dust jacket is included if applicable. No missing or damaged pages, no tears, possible very minimal creasing, no underlining or highlighting of text, and no writing in the margins.