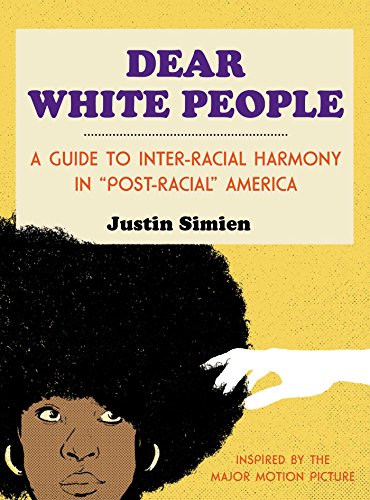 Used Price
$14.39
Free Shipping in the US
A witty companion book to the "incredibly entertaining" (Indiewire) film of the same name.
Reviews:
Trustpilot
Very Good

In the satirical tradition of the New York Times bestseller Stuff White People Like comes this witty companion book to the "incredibly entertaining" (Indiewire) film of the same name, which "heralds a fresh and funny new voice" (Variety).

Right out of college, Justin Simien wrote a screenplay about the nuanced experiences of four black students on a predominantly white college campus. The film, Dear White People, garnered a Sundance Award for "Breakthrough Talent" and has been hailed by critics everywhere. Channeling the sensibility of the film into this book, Simien will keep you laughing with his humorous observations, even if you haven't seen the satiric film.

News Flash-the minimum number of black friends needed to not seem racist has just been raised to two. Rather than panic, readers are advised to purchase a copy of Dear White People. Whether you are a dear white person wondering why your black office mate is avoiding eye contact with you after you ran your fingers through her hair, or you're a black nerd who has to break it to your white friends that you've never seen The Wire, this myth-busting, stereotype-diffusing guide to a post-Obama world has something for you!

With decision-making trees to help you decide when it's the right time to wear Blackface (hint: probably never) and quizzes to determine whether you've become the Token Black Friend (TM), Dear White People is the ultimate silly-yet-authoritative handbook to help the curious and confused navigate racial microaggressions in their daily lives.

Based on the eponymous, award-winning film, which has been lauded as "a smart, hilarious satire," this tongue-in-cheek guide is a must-have that anybody who is in semi-regular contact with black people can't afford to miss!

"Seeming to draw equal measures of inspiration from Whit Stillman and Spike Lee, but with his own tart, elegant sensibility very much in control, Mr. Simien evokes familiar campus stereotypes only to smash them and rearrange the pieces." -- A. O. Scott * The New York Times *

Justin Simien is the creator of the popular Netflix series Dear White People, as well as the writer and director of the critically acclaimed feature film of the same title, which won the Special Jury Award for "Breakthrough Talent" at Sundance 2014. Simien was also featured in Variety as one of "10 Directors to Watch." In addition to producing and directing online companion pieces for Participant Media's The Help, The Best Exotic Marigold Hotel, and Middle of Nowhere campaigns, he has also written, produced, and directed for Take Part TV, Participant Media's funded YouTube channel.

GOR006907724
Dear White People by Justin Simien
Justin Simien
Used - Very Good
Hardback
Simon & Schuster
2017-07-27
160
1476798095
9781476798097
N/A
Book picture is for illustrative purposes only, actual binding, cover or edition may vary.
This is a used book - there is no escaping the fact it has been read by someone else and it will show signs of wear and previous use. Overall we expect it to be in very good condition, but if you are not entirely satisfied please get in touch with us.