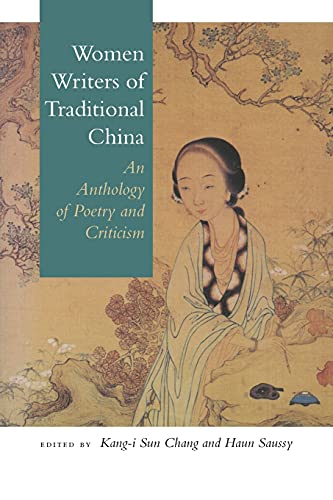 Used Price
$27.99
Free Shipping in the US
The book also includes an extended section of criticism by and about women writers.
Reviews:
Trustpilot
Very Good

Women Writers of Traditional China: An Anthology of Poetry and Criticism by Kang-i Sun Chang

This anthology of Chinese women's poetry in translation brings together representative selections from the work of some 130 poets from the Han dynasty to the early twentieth century. To measure the development of Chinese women's poetry, one must take into account not only the poems but also the prose writings-prefaces, biographies, theoretical tracts-that framed them and attempted to shape women's writing as a distinct category of literature. To this end, the anthology contains an extended section of criticism by and about women writers.

These poets include empresses, imperial concubines, courtesans, grandmothers, recluses, Buddhist nuns, widows, painters, farm wives, revolutionaries, and adolescent girls thought to be incarnate immortals. Some women wrote out of isolation and despair, finding in words a mastery that otherwise eluded them. Others were recruited into poetry by family members, friends, or sympathetic male advocates. Some dwelt on intimate family matters and cast their poems as addresses to husbands and sons at large in the wide world of men's affairs. Each woman had her own reasons for poetry and her own ways of appropriating, and often changing, the conventions of both men's and women's verse.

The primary purpose of this anthology is to put before the English-speaking reader evidence of the poetic talent that flourished, against all odds, among women in premodern China. It is also designed to spur reflection among specialists in Chinese poetry, inspiring new perspectives on both the Chinese poetic tradition and the canon of female poets within that tradition. This partial history both connects with and departs from the established patterns for women's writing in the West, thus complementing current discussions of "feminine writing."

"Well organized and thorough, it fills an enormous gap in Western literature on women's literature in China."-Stephen H. West, University of California, Berkeley

CIN000409407
Women Writers of Traditional China: An Anthology of Poetry and Criticism by Kang-i Sun Chang
Kang-i Sun Chang
Used - Very Good
Paperback
Stanford University Press
2000-01-01
928
0804732310
9780804732314
N/A
Book picture is for illustrative purposes only, actual binding, cover or edition may vary.
This is a used book - there is no escaping the fact it has been read by someone else and it will show signs of wear and previous use. Overall we expect it to be in very good condition, but if you are not entirely satisfied please get in touch with us.