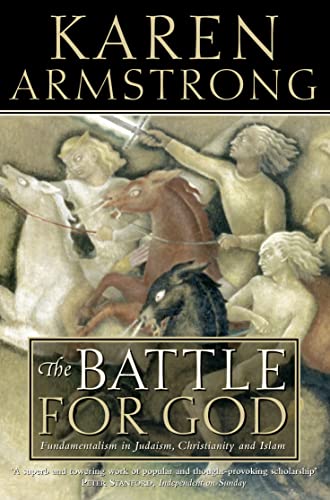 The Battle for God
by Karen Armstrong

The Battle for God Summary

The Battle for God: Fundamentalism in Judaism, Christianity and Islam by Karen Armstrong

One of the most potent forces bedevilling the modern world is religious extremism, and the need to understand it has never been greater.

Focusing in detail on Protestant fundamentalism in the United States, Jewish fundamentalism from sixteenth century Spain onwards and Muslim fundamentalism over the last four hundred years, Armstrong examines the patterns that underlie fundamentalism. These evolve from the clash between the conservative pre-modern mind that is governed by a love of myth, and the progressive rational society that relishes change. Fundamentalists view the contemporary world with horror, rejecting its claims to truth, and a state of war now exists over the future of our culture. They are not terrorists, rather, they are innovative, existing in a symbiotic relationship with an aggressive modernity, each urging the other on to greater excess.

The Battle for God is original in its thesis and in its understanding; as a history of religious ideas it is fascinating, and as an explanation of one of the most destabilizing forces at large in the world today it is extraordinary.

The Battle for God Reviews

`Armstrong displays all her usual talents: she has an eye for colourful evidence, a wonderful gift for clarity of exposition and an unerring sense of pace and voice and narrative.'
Felipe Fernandez-Armesto, Literary Review

Karen Armstrong spent seven years as a Roman Catholic nun; in 1969 she left and took an Oxford degree, and now teaches at the Leo Baeck College for the Study of Judaism and the Training of Rabbis and Teachers, and is also an honorary member of the Association of Muslim Social Sciences.

GOR001225855
The Battle for God: Fundamentalism in Judaism, Christianity and Islam by Karen Armstrong
Karen Armstrong
Used - Very Good
Paperback
HarperCollins Publishers
2001-04-02
464
0006383483
9780006383482
N/A
Book picture is for illustrative purposes only, actual binding, cover or edition may vary.
This is a used book - there is no escaping the fact it has been read by someone else and it will show signs of wear and previous use. Overall we expect it to be in very good condition, but if you are not entirely satisfied please get in touch with us.