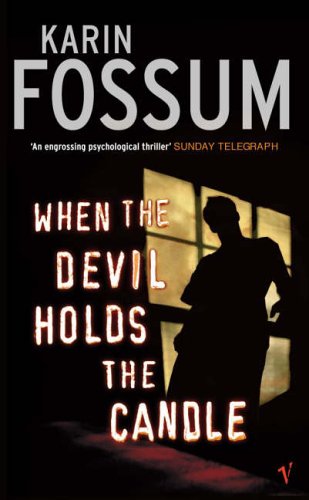 When the Devil Holds the Candle
by Karin Fossum

In Stock
$18.49
'Has anyone seen Andreas?'Andreas's disappearance is a mystery to all, including his inseparable friend Zipp.
Very Good
Only 2 left

When the Devil Holds the Candle Summary

When the Devil Holds the Candle by Karin Fossum

'Has anyone seen Andreas?' Andreas's disappearance is a mystery to all, including his inseparable friend Zipp. But its not easy for Zipp to come forward with details of the last time he saw his friend - they had been following an old woman, an easy target for some quick cash, and Andreas boldly followed her into her home brandishing his knife, the next moment he was gone. Zipp waited anxiously outside but Andreas failed to reappear. Inspector Sejer and his colleague Skarre are baffled but while the confusion in the outside world continues, a chilling and heart-stopping drama is unfolding inside the old woman's home. In a plot in the tradition of Stephen King, Fossum deploys her trademark skill of looking realistically, terrifyingly, into the minds of criminal and victim. Appearances aren't always to be believed, and people are not always what they seem.

When the Devil Holds the Candle Reviews

"Like the best Rendell, this unsettling novel tackles the reasons people commit crimes and the devastating effect it has on the protagonists lives" * Good Book Guide *
"Explores the process of scapegoating, and the awful human cost of false accusations ... may well bring the half-Swedish Ruth Rendell irresistibly to mind" -- Boyd Tonkin * Independent *
"Marked by an intelligence and compassion not often found in the pages of crime fiction" -- Donna Leon * Sunday Times *

Karin Fossum's critically acclaimed novels have won numerous prizes. She is two-time winner of the prestigious Riverton Award and has also won the Glass Key Award for the best Nordic crime novel, an honour shared with Henning Mankell and Jo Nesbo, as well as the Los Angeles Times Book Prize. Her highly acclaimed Inspector Sejer series has been published in more than forty countries.

GOR001234088
When the Devil Holds the Candle by Karin Fossum
Karin Fossum
Inspector Sejer
Used - Very Good
Paperback
Vintage Publishing
2004-12-04
368
0099461129
9780099461128
N/A
Book picture is for illustrative purposes only, actual binding, cover or edition may vary.
This is a used book - there is no escaping the fact it has been read by someone else and it will show signs of wear and previous use. Overall we expect it to be in very good condition, but if you are not entirely satisfied please get in touch with us.