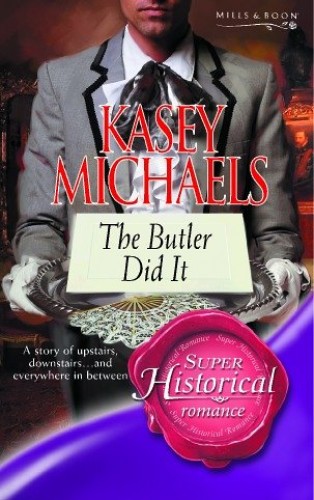 The Butler Did It
by Kasey Michaels

Like every noble in the London peerage, Morgan Drummond, Marquis of Westham, expects his butler to be awaiting his return home - even when that return follows a five-year absence.

The Butler Did It Summary

The Butler Did It (Mills & Boon Historical) (Westham-Brentwood, Book 1) by Kasey Michaels

Like every noble in the London peerage, Morgan Drummond, Marquis of Westham, expects his butler to be awaiting his return home - even when that return follows a five-year absence.

But he didn't expect the horde of strangers who've taken up residence in his house, courtesy of that enterprising butler and a discreet classified ad. Morgan's plan to toss his unwelcome tenants into the street is thwarted by a beautiful but indomitable debutante, Miss Emma Clifford - who's not averse to a bit of blackmail for a good cause.

Now Morgan finds himself squiring the lovely Emma to the ton's most fashionable events - and what's more surprising, he's beginning to enjoy it. Surely he's not falling for such an infuriating woman, even if she does have a way of making him forget his own name? That butler has a lot to answer for - but then again, it's so hard to find good help....

Customer Reviews - The Butler Did It

GOR001468579
The Butler Did It (Mills & Boon Historical) (Westham-Brentwood, Book 1) by Kasey Michaels
Kasey Michaels
Westham-Brentwood
Used - Very Good
Paperback
HarperCollins Publishers
2005-04-01
384
026384515X
9780263845150
N/A
Book picture is for illustrative purposes only, actual binding, cover or edition may vary.
This is a used book - there is no escaping the fact it has been read by someone else and it will show signs of wear and previous use. Overall we expect it to be in very good condition, but if you are not entirely satisfied please get in touch with us.