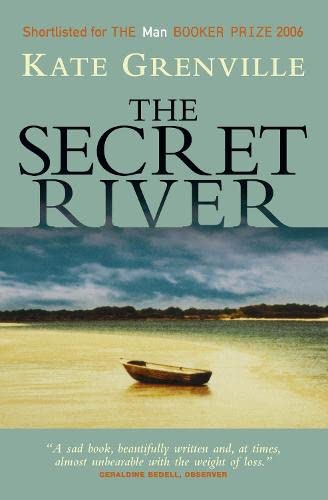 The Secret River
by Kate Grenville

Used Price
$11.69
Free Shipping in the US
And other recent arrivals - Thomas Blackwood, Smasher Sullivan and Mrs Herring - are finding their own ways to respond to them. Soon Thornhill, a man neither better nor worse than most, has to make the most difficult decision of his life
Reviews:
Trustpilot
Very Good Good

The Secret River by Kate Grenville

London, 1807. William Thornhill, happily wedded to his childhood sweetheart Sal, is a waterman on the River Thames. Life is tough but bearable until William makes a mistake, a bad mistake for which he and his family are made to pay dearly. His sentence: to be transported to New South Wales for the term of his natural life. The Thornhills arrive in this harsh and alien land that they cannot understand and which feels like a death sentence. But among the convicts there is a rumour that freedom can be bought, that 'unclaimed' land up the Hawkesbury offers an opportunity to start afresh, far away from the township of Sydney. When William takes a hundred acres for himself he is shocked to find Aboriginal people already living on the river. And other recent arrivals - Thomas Blackwood, Smasher Sullivan and Mrs Herring - are finding their own ways to respond to them. Soon Thornhill, a man neither better nor worse than most, has to make the most difficult decision of his life

A vivid evocation of the rawest kind of colonialism. -- Jem Poster * * Books * *
Winner of the 2001 Orange Prize for Fiction with The Idea of Perfection, Grenville's latest, beautifully written novel concerns William Thornhill, a 19th-century convict from London deported to Australia, where he staked a claim on ancient Aboriginal lands - with tragic consequences. * * Financial Times * *
In one stroke the author captures both Sullivan's emotional dependence and Will's compassion. Will's relationship with Sal is frequently fortified by such psychological insights. Their mutual awareness gives the couple a convincing weight as well as engaging the reader's sympathy and deepening the narrative tension. By this stage, what started as a sumptuous historical with its brilliantly atmospheric depiction of Georgian London's Stygian gloom, has developed into a profound journey of self discovery. * * Independent on Sunday * *
Ambitious new novel... Grenville's skill is to turn what could have been too obviously a representative moral fable into a rich novel of character. * * Sunday Telegraph * *
We have had to wait five years for The Secret River but the wait has been worth it....Splendidly paced, passionate and disturbing. * * The Times * *

Kate Grenville is one of Australia's best-loved authors. Her works of fiction have won numerous awards both in Australia and internationally. THE IDEA OF PERFECTION won the 2001 Orange Prize for Fiction and became a long-running bestseller. In 2006 THE SECRET RIVER won the Commonwealth Writers' Prize and was shortlisted for the Man Booker Prize. SEARCHING FOR THE SECRET RIVER, the story behind this novel, is also available from Canongate, alongside her first novel LILIAN'S STORY. Kate Grenville lives in Sydney.

GOR001006566
The Secret River by Kate Grenville
Kate Grenville
Used - Very Good
Paperback
Canongate Books Ltd
2006-09-07
368
1841958298
9781841958293
Short-listed for The Man Booker Prize 2006 (UK)
Book picture is for illustrative purposes only, actual binding, cover or edition may vary.
This is a used book - there is no escaping the fact it has been read by someone else and it will show signs of wear and previous use. Overall we expect it to be in very good condition, but if you are not entirely satisfied please get in touch with us.