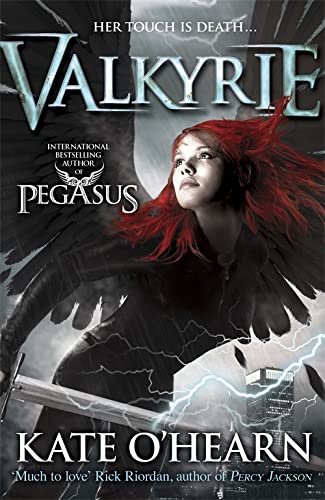 If you're BRAVE and BOLD, enter the world of the VALKYRIE ...

Freya is dreading turning fourteen - that marks the official end of her childhood and when she takes up full duties of a Valkyrie - a collector of souls from humanity's battlefields.
But Freya is unlike any other Valkyrie. She doesn't want to follow in the footsteps of the legends before her. As she observes from Asgard, she tries to understand what it is to be human: to make friends with girls her own age and laugh with boys, without the fear of causing their death with one touch.
Little does she know that her dreams will soon be realized: on her first battlefield mission, Freya reaps the soul of a soldier with unfinished business that will send her to the human world on a deadly quest. And there she must battle both ordinary and extraordinary enemies to create a new VALKYRIE legend.

"Anyone who enjoys Greek mythology will find much to love in Pegasus and the
Flame. Kate O'Hearn serves up a winning mix of modern adventure and classic
fantasy."

* Rick Riordan, author of the Percy Jackson series *
has really captured readers' imaginations * The Bookseller *
A great story... filled with moral dilemmas, action and one girl's determination to do the right thing. * The Guardian *
A magical and mighty read befitting a story set in the world of the gods ... A richly imagined adventure that blends myth and reality into a story of heroics and heroism. * Julia Eccleshare, LoveReading4kids *

PRAISE FOR SHADOW OF THE DRAGON:
'Great characters, good comedy, action, adventure and dragons. What more could a young fantasy fan ask for?'

* The Bookbag *
an exciting, fast-paced adventure filled with strong female protagonists. * School Librarian *
an action packed, gripping adventure story bringing the world of fantasy directly to a young female readership. Kate O'Hearn is perhaps the Anne McAffrey for the twenty-first century. * School Librarian *
... packed with action * Carousel *
This is a fine tale of high fantasy ... catches your imagination and heart. * Kiss the Book *
This exhilarating story captures the reader's interest from the opening interaction between Kira and her parents to the breathless conclusion. * VOYA *
Contemporary and mythological worlds collide in an exciting new adventure based on Norse mythology from the Pegasus series author. It looks very strong and there's plenty to appeal to her fans: a feisty heroine, monstrous creatures and epic battles. * Children's Bookseller *
A coming of age story with a difference. * Norfolk *
Modern world meets mythology, and a spirited new heroine stars in this story of good versus evil. * Calgary Herald *

Kate O'Hearn was raised in the heart of New York City. She has always had an active and vivid imagination - as a child walking down Fifth Avenue, she would envision herself soaring among the city's canyons on the back of a wild dragon. While in Florida, looking over the sea, she could imagine living amongst the whales and breaching in the heavy swells. At night, a star studded sky was yet another playground. These dreams and ideas never faded. They grew until they spilled over into the books she loves to write. Kate's first book, Shadow of the Dragon, won the 1066 Schools' Book Award.

GOR005210234
Valkyrie: Book 1 by Kate O'Hearn
Kate O'Hearn
Valkyrie
Used - Very Good
Paperback
Hachette Children's Group
2013-04-30
352
1444907557
9781444907551
N/A
Book picture is for illustrative purposes only, actual binding, cover or edition may vary.
This is a used book - there is no escaping the fact it has been read by someone else and it will show signs of wear and previous use. Overall we expect it to be in very good condition, but if you are not entirely satisfied please get in touch with us.