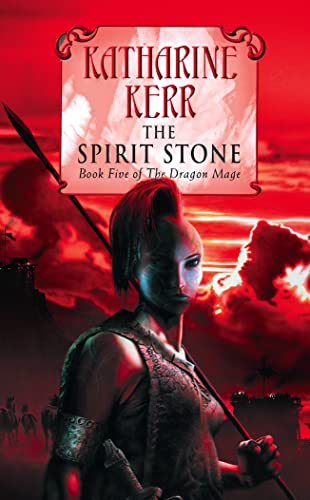 The Spirit Stone
by Katharine Kerr

The Spirit Stone (The Silver Wyrm, Book 2) by Katharine Kerr

`A dagger laid against our throat.'

So Prince Dar of the Westlands calls Zakh Gral, a new fortress built by the Horsekin, the ancient enemies of his people. To help him destroy this threat, the elven prince has called upon his allies: the dwarven folk of the northern mountains and the human men of Deverry to the east. Their leaders know that if the Westlands fall to the Horsekin, their own throats will feel that dagger next. Joining them are two powerful dragons, who have their own bitter reasons to hate the Horsekin.

But the fanatical Horsekin believe that they have the most powerful ally of all: a new goddess. Alshandra's priestesses have announced that she has given the Horsekin the lands belonging to the prince - and that his people must be utterly destroyed.

Praise for Katharine Kerr and the Deverry novels:

`Much as I dislike comparing anything to The Lord of the Rings, I have to admit that on this occasion it's justified' Interzone

`Kerr is a master of her trade...She has created a world that might very well go on for ever, and this one reader sincerely hopes it does.' Vector

Katharine Kerr was born in Ohio in 1944 and now lives in San Francisco. Her extensive reading in the fields of classical archeology, and medieval and dark ages history and literature, has had a clear influence on her work. Her epic Deverry series has won widespread praise and millions of fans around the world.

GOR001249011
The Spirit Stone (The Silver Wyrm, Book 2) by Katharine Kerr
Katharine Kerr
The Silver Wyrm
Used - Very Good
Paperback
HarperCollins Publishers
2008-02-04
416
0007128738
9780007128730
N/A
Book picture is for illustrative purposes only, actual binding, cover or edition may vary.
This is a used book - there is no escaping the fact it has been read by someone else and it will show signs of wear and previous use. Overall we expect it to be in very good condition, but if you are not entirely satisfied please get in touch with us.