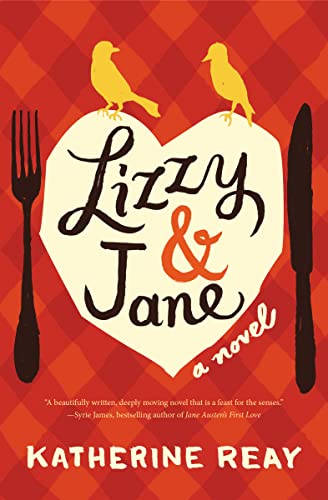 Lizzy and Jane
by Katherine Reay

Used Price
$15.49
Free Shipping in the US
Lizzy and Jane couldn't be further from Jane Austen's famous sisters for whom they are named.
Very Good

Lizzy and Jane by Katherine Reay

Lizzy and Jane couldn't be further from Jane Austen's famous sisters for whom they are named.

Elizabeth left her family's home in Seattle fifteen years ago to pursue her lifelong dream-chefing her own restaurant in New York City. Jane stayed behind to raise a family. Estranged since their mother's death many years ago, the circumstances of their lives are about to bring them together once again.

Known for her absolute command of her culinary domain, Elizabeth's gifts in the kitchen have begun to elude her. And patrons and reviewers are noticing. In need of some rest and an opportunity to recover her passion for cooking, Elizabeth jumps at the excuse to rush to her sister's bedside when Jane is diagnosed with cancer. After all, Elizabeth did the same for their mother. Perhaps this time, it will make a difference.

As Elizabeth pours her renewed energy into her sister's care and into her burgeoning interest in Nick, Jane's handsome coworker, her life begins to evolve from the singular pursuit of her own dream into the beautiful world of family, food, literature, and love that was shattered when she and Jane lost their mother. Will she stay and become Lizzy to her sister's Jane-and Elizabeth to Nick's Mr. Darcy-or will she return to the life she has worked so hard to create?

"Reay's second Jane Austen-inspired tale is a layered and nuanced story of faith and hope, enriched by complex but relatable characters. Recommended for lovers of character-driven women's fiction." * Library Journal *
"Okay, I'm just going to say it upfront. This isn't so much a review as it is a love letter to the uber-talented Katherine Reay. I have been eagerly awaiting the release of Lizzy and Jane since I forlornly turned the final page of Katherine Reay's critically acclaimed, beloved, double Carol Award-winning debut, Dear Mr. Knightley last year (sidebar, if you haven't read Dear Mr. Knightley run, do not walk, to your nearest bookstore for a copy). . . . "Bookstores are packed with novels starring characters battling with cancer. Where Katherine Reay's storytelling sets itself apart is with this - she has managed to write a book that is all about cancer, yet at the same time not about cancer at all. The stars of the show here are Lizzy and Jane - their taut relationship, their fears, regrets and failures, their hopes and dreams and yes, their grappling with the disease that has already cost them so dearly. "Classic literature lovers will again enjoy the way Reay seamlessly weaves in literary references - from Hemingway to Austen to Dickens. Not in a snobbish, showboating way, but with a deft hand that adds color and depth to the story. . . . "Buy this book. Savor this book. It's poignant, it's witty, it's got romance and drama and complex characters and dialogue and it's clever and it makes you think and sigh and, yes, even swoon and the food, oh the food. It's the kind of book that makes you want to start again from the beginning as soon as you've reached the end because it has so many layers, subtleties, and depth, it's impossible to absorb it all in one mere read. As I knew it would, Lizzy and Jane has firmly enshrined itself as one of my ten must-reads for 2014. Seriously, why are you still reading this? GO AND READ LIZZY and JANE INSTEAD.' * Novel Crossing *
"A Rising Star in Contemporary Fiction!" * Family Fiction *
"Elizabeth Hughes is a respected chef in New York, but she's lost her passion and knows her restaurant is suffering. Fighting burnout, she decides to visit her sister Jane, who is battling cancer. As Elizabeth and her sister struggle to reconnect after years of misunderstanding and betrayal, there are very real moments of pain and vulnerability. In her own words, Elizabeth is 'bristly, rude, and terribly self-absorbed,' and her sister is more of the same. Although Lizzy and Jane were named for Jane Austen's most famous sisters, this story tracks with Persuasion, in both caustic tone and the encompassing theme of a life more fully lived. Filled with food and literary food references, this book will appeal to literature aficionados, foodies, and any lover of a good romance." * CBA Retailers + Resources *
"Deeply moving and intensely meaningful, Reay's latest gives readers an intimate look into the lives of sisters. Elizabeth's character is raw and real - her desire to live a meaningful life and her authentic fear of rejection will help everyone identify closely with her journey. Delicious descriptions of food and the closeness that it provides to others gives the novel even more depth." SUMMARY: After the ordeal of her mother's battle with, and death from, cancer when she was a teenager, Elizabeth has spent the following years making a name for herself as a chef while keeping her distance from her father and older sister, Jane. Yet Elizabeth has lost her edge with her restaurant and decides to visit her family on the west coast. Jane is undergoing chemo for cancer, and as much as Elizabeth wants to avoid the situation, she must find a way to help Jane and figure out the next steps in her own life.' * RT Book Reviews, 4-1/2 Stars TOP PICK! *
"In a rich feast for the senses---both literary and culinary---Reay's (Dear Mr. Knightley) sophomore novel introduces two estranged sisters who rediscover the meaning of family 15 years after their mother succumbed to cancer. Master chef Elizabeth, or Lizzy, has lost her touch at work and finds her New York restaurant slipping out of her control. Needing time off, she journeys back home---to sit in the oncology ward with her sister, Jane, who is now fighting breast cancer. The stressful circumstances force them back into a real relationship, an uncomfortable reunion in which they confront their past and contemplate their uncertain futures. Jane Austen books and delicious foods remind them of surprising and comforting truths imparted to them by mother. Jane's husband and children, her fellow chemotherapy patients, and her colleague Nick play important roles in helping Lizzy find the source for the peace she desperately craves. Reay treats readers to a banquet of flavors, aromas, and textures that foodies will appreciate, and clever references to literature add nuances sure to delight bibliophiles. The relatable, very real characters, however, are what will keep readers clamoring for more from this talented author." * Publishers Weekly *

Katherine Reay is the national bestselling and award-winning author of Dear Mr. Knightley, Lizzy and Jane, The Bronte Plot, A Portrait of Emily Price, The Austen Escape, and The Printed Letter Bookshop. All Katherine's novels are contemporary stories with a bit of classical flair. Katherine holds a BA and MS from Northwestern University, graduating Phi Beta Kappa, and is a wife, mother, former marketer, and avid chocolate consumer. After living all across the country and a few stops in Europe, Katherine now happily resides outside Chicago, IL. You can meet her at www.katherinereay.com; Facebook: KatherineReayBooks; Twitter: @katherine_reay; or Instagram: @katherinereay.

GOR009463547
Lizzy and Jane by Katherine Reay
Katherine Reay
Used - Very Good
Paperback
Thomas Nelson Publishers
2014-11-06
352
1401689736
9781401689735
Commended for Carol Award (Contemporary) 2015 Commended for INSPYs the Bloggers Awards for Excellence in Faith-Driven Literature (General Fiction) 2015
Book picture is for illustrative purposes only, actual binding, cover or edition may vary.
This is a used book - there is no escaping the fact it has been read by someone else and it will show signs of wear and previous use. Overall we expect it to be in very good condition, but if you are not entirely satisfied please get in touch with us.