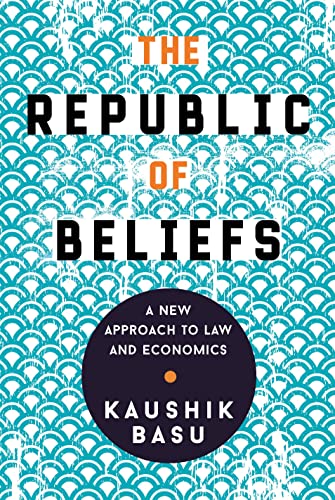 The Republic of Beliefs
by Kaushik Basu

The Republic of Beliefs Summary

The Republic of Beliefs: A New Approach to Law and Economics by Kaushik Basu

In The Republic of Beliefs, Kaushik Basu, one of the world's leading economists, argues that the traditional economic analysis of the law has significant flaws and has failed to answer certain critical questions satisfactorily. Why are good laws drafted but never implemented? When laws are unenforced, is it a failure of the law or the enforcers? And, most important, considering that laws are simply words on paper, why are they effective? Basu offers a provocative alternative for how the relationship between economics and real-world law enforcement can be understood.

Basu summarizes standard, neoclassical law and economics before looking at the weaknesses underlying the discipline. Bringing modern game theory to bear, he develops a "focal point" approach, modeling not just the self-interested actions of the citizens who must follow laws but also the functionaries of the state-the politicians, judges, and bureaucrats-enforcing them. He demonstrates the connections between social norms and the law and shows how well-conceived ideas can change and benefit human behavior. For example, bribe givers and takers will collude when they are treated equally under the law. And in food support programs, vouchers should be given directly to the poor to prevent shop owners from selling subsidized rations on the open market. Basu provides a new paradigm for the ways that law and economics interact-a framework applicable to both less-developed countries and the developed world.

Highlighting the limits and capacities of law and economics, The Republic of Beliefs proposes a fresh way of thinking that will enable more effective laws and a fairer society.

Customer Reviews - The Republic of Beliefs

The Republic of Beliefs Reviews

"The book is a message of hope that institutions and laws governing citizens are not static. It has the potential to reinvigorate the space for multidisciplinary inquiries into law and economics, and promises to develop a framework for law and economics that departs from orthodoxy."---Sarthak Gaurav, Economic & Political Weekly
"In this important book which is most lucidly written, Basu shows that a game-theory paradigm can lead us to ask critically important questions about what it is that might make people observe the law."---Robert Lee, Journal of Law and Society
"

An unqualified success. . . . the argument in its totality is overwhelming, and it is only to be
hoped that practitioners of the discipline of law and economics will be willing to bring
its suggestions to fruition.

"---Mario Ferrero, Journal of Economics
"One of Diane Coyle's Best Economic Books of 2018"
"One of the most interesting and exhilarating books I've read for ages. . . . This is a beautifully written book, very profound. . . . The Republic of Beliefs offers a distinctive and revealing perspective on public policy, and couldn't be more timely."---Diane Coyle, Enlightenment Economics
"The book resolves several conundrums faced by the existing L and E discipline. . . . the book provides a rich framework that can be used by the researchers and policymakers to address the outstanding issues."---Ram Singh, Indian Economic Review

Kaushik Basu is professor of economics and the Carl Marks Professor of International Studies at Cornell University. He was previously chief economist and senior vice president of the World Bank and chief economic advisor of the Government of India. His books include Beyond the Invisible Hand (Princeton) and Prelude to Political Economy.

CIN000404471
The Republic of Beliefs: A New Approach to Law and Economics by Kaushik Basu
Kaushik Basu
Used - Very Good
Hardback
Princeton University Press
2018-06-12
264
0691177686
9780691177687
N/A
Book picture is for illustrative purposes only, actual binding, cover or edition may vary.
This is a used book - there is no escaping the fact it has been read by someone else and it will show signs of wear and previous use. Overall we expect it to be in very good condition, but if you are not entirely satisfied please get in touch with us.