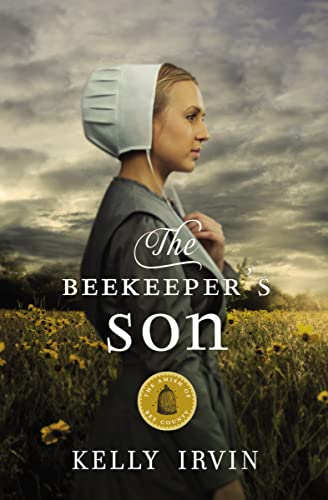 The Beekeeper's Son
by Kelly Irvin

Used Price
$16.99
Free Shipping in the US
Sometimes it takes a barren landscape to see the beauty of God's creation.
Reviews:
Trustpilot
Good

The Beekeeper's Son by Kelly Irvin

Sometimes it takes a barren landscape to see the beauty of God's creation.

Phineas King knows better than to expect anything but shock and pity wherever he shows his face. Horribly scarred from the tragic accident that claimed his mother's life, he chooses to keep his distance from everyone, focusing his time and energy on the bees his family raises. If no one sees him, no one can judge him. So why does he start finding excuses to seek out Deborah Lantz, the beautiful new arrival in town?

Deborah can't get out of Bee County, Texas, soon enough. Once her mother and younger siblings are settled, she is on the first bus out of this dusty town. She is only waiting on the letter from Aaron, asking her to return to lush Tennessee to be his fraa. But that letter never comes. As she spends time getting to know Phineas-hoping to uncover the man beneath the scars-she begins to realize that she no longer minds that Aaron hasn't sent for her.

As both Deborah and Phineas try to come to terms with lives that haven't turned out the way they imagined, they discover that perhaps Gott's plans for them are more extraordinary than they could have dreamed. But they need to let go of their own past sorrows and disappointments to find the joy and beauty that lies just ahead for them both.

'The Beekeeper's Son is so well crafted. Each character is richly layered. I found myself deeply invested in the lives of both the King and Lantz families. I struggled as they struggled, laughed as they laughed - and even cried as they cried.... This is one of the best novels I have read in the last six months. It's a refreshing read and worth every penny. The Beekeeper's Son is a keeper for your bookshelf!' * Destination Amish *

Kelly Irvin is the bestselling author of the Every Amish Season and Amish of Bee County series. The Beekeeper's Son received a starred review from Publishers Weekly, who called it a "beautifully woven masterpiece." The two-time Carol Award finalist is a former newspaper reporter and retired public relations professional. Kelly lives in Texas with her husband, photographer Tim Irvin. They have two children, three grandchildren, and two cats. In her spare time, she likes to read books by her favorite authors. Visit her online at KellyIrvin.com; Instagram: kelly_irvin; Facebook: Kelly.Irvin.Author; Twitter: @Kelly_S_Irvin.

GOR009507052
The Beekeeper's Son by Kelly Irvin
Kelly Irvin
The Amish of Bee County
Used - Good
Paperback
Zondervan
2014-12-14
352
0310339456
9780310339458
N/A
Book picture is for illustrative purposes only, actual binding, cover or edition may vary.
This is a used book - there is no escaping the fact it has been read by someone else and it will show signs of wear and previous use. Overall we expect it to be in very good condition, but if you are not entirely satisfied please get in touch with us.