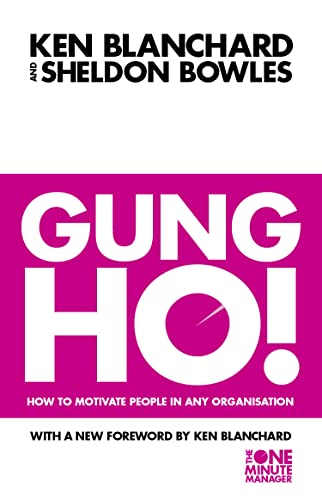 An invaluable new strategy for creating enthusiastic employees, from the author of the bestselling The One Minute Manager.

Gung Ho! (The One Minute Manager) by Kenneth Blanchard

An invaluable new strategy for creating enthusiastic employees, from the author of the bestselling The One Minute Manager.

Every day thousands of uninspired employees trudge to work - often dooming their companies to failure with their lack of enthusiasm.

Drawing on over 20 years' experience of working with hundreds of corporations across the US - including America Online, Eastman Kodak, General Motors, Hershey Chocolate and Microsoft - Blanchard reveals a sure-fire strategy for boosting employee enthusiasm, productivity and performance.

Gung Ho! presents a simple system for inspiring employees. Based on three core ideas: work must be seen as important, workers must be put in control of their own production and managers must cheer their workers on - it is a method that all employees and managers can easily implement and which has already been adopted by such major corporations as K-Mart.

Ken Blanchard is the founder and Chairman of The Ken Blanchard Companies. His One Minute Manager series has sold over 18 million copies and been translated into more than 25 languages. He has also written or co-authored numerous other books, including Gung Ho!, Big Bucks! and Raving Fans!. The Blanchards currently live in San Diego.

GOR001229670
Gung Ho! (The One Minute Manager) by Kenneth Blanchard
Kenneth Blanchard
The One Minute Manager
Used - Very Good
Paperback
HarperCollins Publishers
1998-02-26
208
0006530680
9780006530688
N/A
Book picture is for illustrative purposes only, actual binding, cover or edition may vary.
This is a used book - there is no escaping the fact it has been read by someone else and it will show signs of wear and previous use. Overall we expect it to be in very good condition, but if you are not entirely satisfied please get in touch with us.