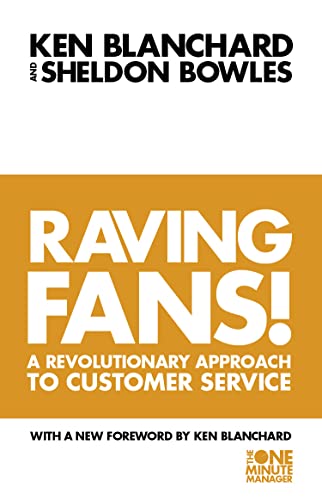 A straightforward and snappy guide to successful customer service from the author of the bestselling The One Minute Manager.

Raving Fans! (The One Minute Manager) by Kenneth Blanchard

A straightforward and snappy guide to successful customer service from the author of the bestselling The One Minute Manager.

Raving Fans, in a nutshell, is the advice given to a new Area Manager on his first day - in an extraordinary business book that will help everyone, in every kind of organisation or business, deliver stunning customer service and achieve miraculous bottom-line results.

Raving Fans is written in the parable style of The One Minute Manager and uses a brilliantly simple and charming story to teach how to define a vision, learn what a customer really wants, institute effective systems, and make Raving Fan Service a constant feature - not just a passing fad.

Business is in the midst of a service crisis that has left millions of disillusioned customers in its wake. Raving Fans includes startling new tips and innovative techniques that can help anyone create a revolution in any workplace - and turn their customers into raving, spending fans.

Ken Blanchard is the founder and Chairman of The Ken Blanchard Companies. His One Minute Manager series has sold over 18 million copies and been translated into more than 25 languages. He has also written or co-authored numerous other books, including Gung Ho!, Big Bucks! and Raving Fans!. The Blanchards currently live in San Diego.

GOR007393995
Raving Fans! (The One Minute Manager) by Kenneth Blanchard
Kenneth Blanchard
The One Minute Manager
Used - Like New
Paperback
HarperCollins Publishers
1998-02-26
160
0006530699
9780006530695
N/A
Book picture is for illustrative purposes only, actual binding, cover or edition may vary.
This is a used book - there is no escaping the fact it has been read by someone else and it will show signs of wear and previous use. Overall we expect it to be in very good condition, but if you are not entirely satisfied please get in touch with us.