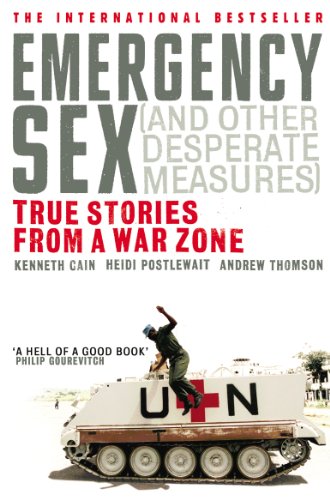 Emergency Sex (And Other Desperate Measures)
by Kenneth Cain

In Stock
$12.39
Deeply critical of the West's indifference to developing countries and the UN's repeated failure to intervene decisively, the book provoked massive controversy on its initial publication.
Very Good Good
9 in stock

Emergency Sex (And Other Desperate Measures): True Stories from a War Zone by Kenneth Cain

What it's really like on the frontline of humanitarian aid It's the early 1990s and three young people are looking to change their lives, and perhaps also the world. Attracted to the ambitious global peacekeeping work of the UN, Andrew, Ken and Heidi's paths cross in Cambodia, from where their fates are to become inextricably bound. Over the coming years, their stories interweave through countries such as Rwanda, Bosnia, Somalia and Haiti - war-torn, lawless places where the intervention of the UN is needed like nowhere else. Driven by idealism, the three struggle to do the best they can, caught up in an increasingly tangled web of bureaucracy and ineffectual leadership. As disillusionment sets in, they attempt to keep hold of their humanity through black humour, revelry and 'emergency sex'. Brutal and moving in equal measure, Emergency Sex (And Other Desperate Measures) explores pressing global issues while never losing a sense of the personal. Deeply critical of the West's indifference to developing countries and the UN's repeated failure to intervene decisively, the book provoked massive controversy on its initial publication. Kofi Annan called for the book to be banned, and debate was sparked about the future direction of the UN. Brilliantly written and mordantly funny, it is a book that continues to make waves.

"Heart wrenching stuff" * Metro *
"A riveting read that vividly dramatises the many contradictions of the world it moves through" * Guardian *
"Vividly told, this book is all the more engaging because its perspective is personal before it is political" * Daily Mail *
"As wonderfully written as it is controversial ... impossible to put down" * Sunday Telegraph *
"This is in every sense a hell of a good book, a powerful testament of the limits of peacekeeping in today's war zone - acutely observed, and told with astonishing immediacy" -- Philip Gourevitch,author of WE WISH TO INFORM YOU THAT TOMORROW WE WILL BE KILLED WITH OUR FAMILIES

Heidi Postlewait, Kenneth Cain & Andrew Thomson served in peacekeeping operations throughout the 90s. All are now based in New York.

GOR001233261
Emergency Sex (And Other Desperate Measures): True Stories from a War Zone by Kenneth Cain
Kenneth Cain
Used - Very Good
Paperback
Ebury Publishing
2006-05-01
320
0091908868
9780091908867
N/A
Book picture is for illustrative purposes only, actual binding, cover or edition may vary.
This is a used book - there is no escaping the fact it has been read by someone else and it will show signs of wear and previous use. Overall we expect it to be in very good condition, but if you are not entirely satisfied please get in touch with us.