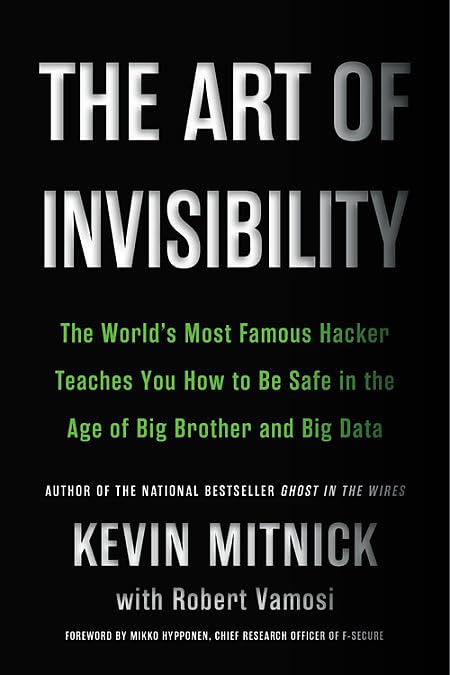 The Art of Invisibility
by Kevin D. Mitnick

Used Price
$17.49
Free Shipping in the US
Kevin Mitnick, the world's most famous hacker, teaches you easy cloaking and counter-measures for citizens and consumers in the age of Big Brother and Big Data.
Reviews:
Trustpilot
Very Good

The Art of Invisibility Summary

The Art of Invisibility: The World's Most Famous Hacker Teaches You How to Be Safe in the Age of Big Brother and Big Data by Kevin D. Mitnick

Like it or not, your every move is being watched and analyzed. Consumer's identities are being stolen, and a person's every step is being tracked and stored. What once might have been dismissed as paranoia is now a hard truth, and privacy is a luxury few can afford or understand.

In this explosive yet practical book, Kevin Mitnick illustrates what is happening without your knowledge--and he teaches you "the art of invisibility." Mitnick is the world's most famous--and formerly the Most Wanted--computer hacker. He has hacked into some of the country's most powerful and seemingly impenetrable agencies and companies, and at one point he was on a three-year run from the FBI. Now, though, Mitnick is reformed and is widely regarded as the expert on the subject of computer security. He knows exactly how vulnerabilities can be exploited and just what to do to prevent that from happening.

In THE ART OF INVISIBILITY Mitnick provides both online and real life tactics and inexpensive methods to protect you and your family, in easy step-by-step instructions. He even talks about more advanced "elite" techniques, which, if used properly, can maximize your privacy. Invisibility isn't just for superheroes--privacy is a power you deserve and need in this modern age.

Customer Reviews - The Art of Invisibility

As the world's most famous hacker, Kevin Mitnick has been the subject of countless news and magazine articles published throughout the world. He has made guest appearances on numerous television and radio programs, offering expert commentary on issues related to information security. Mitnick's leading penetration testing team is highly respected and sought after for their security services to the world's top corporations and governments through the company he founded, Mitnick Security Consulting, LLC. He clients include dozens of the Fortune 500 and world governments. Mitnick is the bestselling author of Ghost in the Wires, Art of Intrusion, and Art of Deception. He lives in Las Vegas, NV.

GOR010305430
The Art of Invisibility: The World's Most Famous Hacker Teaches You How to Be Safe in the Age of Big Brother and Big Data by Kevin D. Mitnick
Kevin D. Mitnick
Used - Very Good
Paperback
Little, Brown & Company
2019-09-26
320
0316380520
9780316380522
N/A
Book picture is for illustrative purposes only, actual binding, cover or edition may vary.
This is a used book - there is no escaping the fact it has been read by someone else and it will show signs of wear and previous use. Overall we expect it to be in very good condition, but if you are not entirely satisfied please get in touch with us.