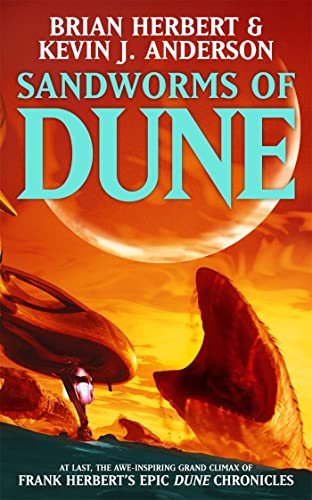 As the no-ship Ithaca flees through space, the heroes of HUNTERS OF DUNE finally meet the Enemy who followed the violent fanatics, the Honored Matres, back to their universe.

The thinking machines vanquished by Serena Butler's jihad were not destroyed, only driven into exile - and now, tens of thousands of years later, they are back. Can the resurrected heroes on board the Ithaca save our race from annihilation?

'[Herbert and Anderson] do a great job in investing the plot with heft and complexity and the narrative with pace and momentum, and conveying the sheer ferocity of the betrayals and duplicities . . . a rare, rattling page-turner that no Dune adherent will pass up.' * Kirkus Reviews *
Frank Herbert would surely be delighted and proud of this continuation of his vision. * Dean Koontz *
Those who long to return to the world of desert, spice and sandworms will be amply satisfied * The Times *
'A triumphant climax to the history of the Dune universe.' * Bookseller on THE BATTLE OF CORRIN *
'For those of us who grew up with the world of spice and sand - how gratifying to revisit characters who felt like old friends, now brought to a satisfying conclusion.' * My Weekly *

Frank Herbert, one of the greatest science fiction authors, died in 1986. His son Brian Herbert is a widely-published science fiction novelist in his own right. Kevin J. Anderson's novels include bestsellers based on the universes of Star Wars and The X Files. Together they created PRELUDE TO DUNE, LEGENDS OF DUNE and THE ROAD TO DUNE, all bestsellers set in the universe created by Frank Herbert.

GOR001229189
Sandworms of Dune by Kevin J. Anderson
Kevin J. Anderson
Used - Very Good
Paperback
Hodder & Stoughton General Division
2008-03-20
624
0340837527
9780340837528
N/A
Book picture is for illustrative purposes only, actual binding, cover or edition may vary.
This is a used book - there is no escaping the fact it has been read by someone else and it will show signs of wear and previous use. Overall we expect it to be in very good condition, but if you are not entirely satisfied please get in touch with us.