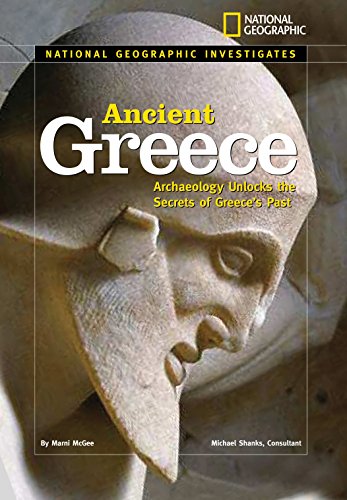 Used Price
$32.99
Free Shipping in the US
Reviews:
Trustpilot
Good

Archaeology unlocks the secrets of Greece's ancient past. Explore the ruins of Greece and Turkey, on land and under sea.

In 1939, the palace of King Nestor in the Mycenaean city of Messina is unearthed near Pylos. In 1996, artifacts from the city, burned around 1200 B.C., link the site to Homer's Odyssey.

This title brings readers into close contact with scientists working to uncover the secrets of the Ancient Greeks, whose artifacts appear at digs across Europe, Asia Minor, and northern Africa.

Ancient Greece includes an interview with underwater archaeologist Faith Hentschel, a past grantee of the National Geographic Society.

Marni McGee grew up in North Carolina. She is a graduate of the University of North Carolina at Chapel Hill and has a MA in religion from Yale Divinity School. McGee is the author of more than 10 published books. Her career as a children's book writer began as entertainment for her own kids. She has had a number of jobs but claims only one profession: "Writing for children is the highest honor and privilege that I can imagine. Children are worth the very best we can give them."

GOR009533407
Ancient Greece by Kiernan Walsh
Kiernan Walsh
Used - Good
Hardback
National Geographic Society
2006-12-08
64
0792278267
9780792278269
N/A
Book picture is for illustrative purposes only, actual binding, cover or edition may vary.
The book has been read but remains in clean condition. All pages are intact and the cover is intact. Some minor wear to the spine.