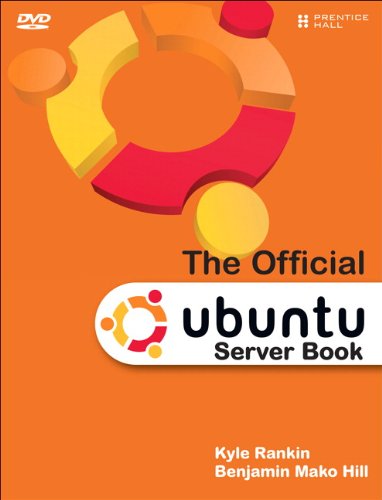 Used Price
$41.99
Free Shipping in the US
Written by leading members of the Ubuntu community, this guide covers all users need to know to make the most of Ubuntu Server, whether they're a beginner or a battle-hardened senior system administrator. Includes two CDs with two versions of Ubuntu Server.
Reviews:
Trustpilot
Very Good

Ubuntu Server is a complete, free server operating system that just works, with the extra Ubuntu polish, innovation, and simplicity that administrators love.

Now, there's a definitive, authoritative guide to getting up-and-running quickly with the newest, most powerful versions of Ubuntu Server. Written by leading members of the Ubuntu community, The Official Ubuntu Server Book covers all you need to know to make the most of Ubuntu Server, whether you're a beginner or a battle-hardened senior system administrator.

The authors cover Ubuntu Server from start to finish: installation, basic administration and monitoring, security, backup, troubleshooting, system rescue, and much more. They walk through deploying each of the most common server applications, from file and print services to state-of-the-art, cost-saving virtualization.

In addition, you'll learn how to
Two CDs are included, which contain two versions of Ubuntu Server: Ubuntu 8.04 LTS, which is supported by Canonical for five years, and the brand-new, cutting-edge Ubuntu Server 9.04.

Kyle Rankin is a systems architect for Quinstreet, Inc., the current president of the North Bay Linux Users' Group, the author of Knoppix Hacks, Knoppix Pocket Reference,Linux Multimedia Hacks, and Ubuntu Hacks, and he has contributed to a number of other O'Reilly books. Kyle is also a columnist for Linux Journal and has had articles featured in PC Magazine, TechTarget, and other publications.

Benjamin Mako Hill is a Seattle native working out of Boston, Massachusetts. Mako is a long-time free software developer and advocate. He was part of the founding Ubuntu team, one of the first employees of Canonical, Ltd., and lead author of The Official Ubuntu Book. In addition to some technical work, his charge at Canonical was to help grow the Ubuntu development and user community during the project's first year. Mako is currently a fellow at the MIT Center for Future Civic Media and a researcher and Ph.D. Candidate at the MIT Sloan School of Management. Mako has continued his involvement with Ubuntu as a member of the Community Council governance board, through development work, and through projects such as this book.

GOR005183683
The Official Ubuntu Server Book by Kyle Rankin
Kyle Rankin
Used - Very Good
Hardback
Pearson Education (US)
2009-07-17
528
0137021186
9780137021185
N/A
Book picture is for illustrative purposes only, actual binding, cover or edition may vary.
This is a used book - there is no escaping the fact it has been read by someone else and it will show signs of wear and previous use. Overall we expect it to be in very good condition, but if you are not entirely satisfied please get in touch with us.