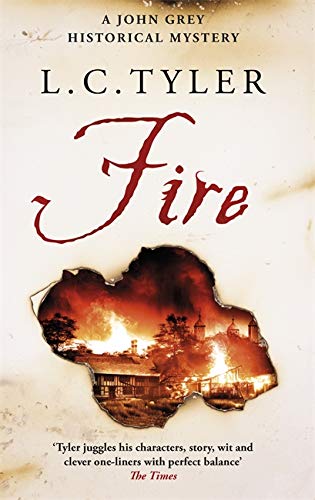 1666. London has been destroyed by fire and its citizens are looking for somebody, preferable foreign, to blame. Only the royal Court, with its strong Catholic sympathies, is trying to dampen down the post-conflaguration hysteria. Then, inconveniently, a Frenchman admits to having started it together with an accomplice, whom he says he has subsequently killed.

John Grey is tasked by Secretary of State, Lord Arlington, with proving conclusively that the self-confessed fire-raiser is lying. Though Grey agrees with Arlington that the Frenchman must be mad, he is increasingly perplexed at how much he knows. And a body has been discovered that appears in every way to match the description of the dead accomplice.

Grey's investigations take him and his companion, Lady Pole, into the dangerous and still smoking ruins of the old City. And somebody out there - somebody at the very centre of power in England - would prefer it if they didn't live long enough to conclude their work...

'Tyler juggles his characters, story wit and clever one liners with perfect balance' The Times

'A cracking pace, lively dialogue, wickedly witty one-liners salted with sophistication . . . Why would we not want more of John Grey?' The Bookbag

'A dizzying whirl of plot and counterplot' Guardian

'I was seduced from John Grey's first scene' Ann Cleeves

Tyler at his entertaining best . . . a Restoration romp delivered with aplomb and verbal artistry, a delicious slice of history in all its dark, dank and deadly reality, and a veritable stage show of witty one-liners wrapped up in an enthralling mystery adventure * Lancashire Evening Post *
A historical thriller, but one written with tongue firmly in cheek . . . Tyler is a witty writer, and this third outing for Grey is great fun * Sunday Times *
A fast-paced tale of double-crossing and double agents during a tumultuous period in English history .... the humour running through the book is a delight * The Times *
There are moments that made me laugh out loud and moments that had me on the edge of my seat . . . The ins and outs of the conspiracy and Grey's adventures as he struggles to find the truth kept me gripped from beginning to end . . . highly recommended * Puzzle Doctor *
This is fine writing and the tension and danger of the mystery is complemented by the humour of the narrative and dialogue. The mystery is such a good one and the setting in London's smouldering ruins is richly evocative . . . I can't wait for the next * For Winter Nights *

L. C. Tyler was born in Essex and educated at Jesus College Oxford and City University. His comic crime series featuring author-and-agent duo Ethelred Tressider and Elsie Thirkettle has twice been nominated for Edgar Allan Poe Awards and he won the Goldsboro Last Laugh Award with Herring in the Library. His latest crime series is set in the seventeenth century and features lawyer John Grey.

He has lived and worked all over the world, but has more recently been based in London and Sussex.

GOR009533165
Fire by L.C. Tyler
L.C. Tyler
A John Grey Historical Mystery
Used - Very Good
Paperback
Little, Brown Book Group
2018-10-25
304
1472122909
9781472122902
Long-listed for CWA Historical Dagger 2018 (UK)
Book picture is for illustrative purposes only, actual binding, cover or edition may vary.
This is a used book - there is no escaping the fact it has been read by someone else and it will show signs of wear and previous use. Overall we expect it to be in very good condition, but if you are not entirely satisfied please get in touch with us.