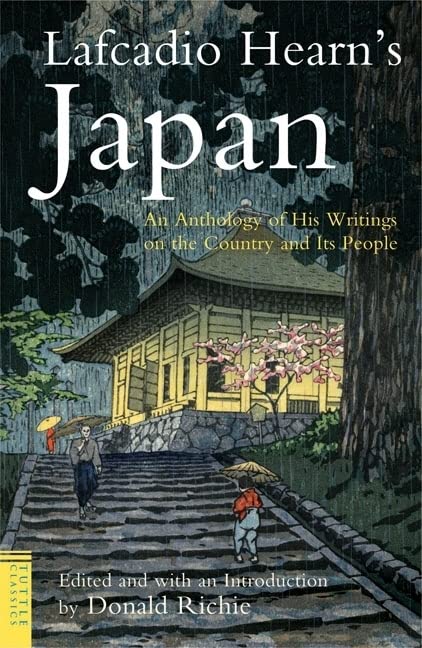 Used Price
$10.69
Free Shipping in the US
Lafcadio Hearn is one of the best-known Westerners to ever make Japan his home
Reviews:
Trustpilot
Very Good

Over a century after his death, author, translator, and educator Lafcadio Hearn remains one of the best-known Westerners ever to make Japan his home. Almost more Japanese than the Japanese-"to think with their thoughts" was his aim-his prolific writings on things Japanese were instrumental in introducing Japanese culture to the West.

In this masterful anthology, Donald Richie shows that Hearn was first and foremost a reliable and enthusiastic observer, who faithfully recorded a detailed account of the people, customs, and culture of late nineteen-century Japan. Opening and closing with excerpts from Hearn's final books, Richie's astute selection from among "over 4,000 printed pages" not including correspondence and other writing, also reveals Hearn's later, more sober and reflective attitudes to the things that he observed and wrote about.

Part One, "The Land," chronicles Hearn's early years when he wrote primarily about the appearance of his adopted home. Part Two, "The People," records the author's later years when he came to terms with the Japanese themselves. In this anthology, Richie, more gifted in capturing the essence of a person on the page than any other foreign writer living in Japan, has picked out the best of Hearn's evocations.

Lafcadio Hearn (1850-1904) was born on the Greek island of Lefkas, the son of an Anglo-Irish surgeon in the British army and a Greek mother. After his parent's divorce when he was six, he was brought up in Dublin by a great aunt. At the age of nineteen, he went to America, eventually ending up in New Orleans as a newspaper reporter. His flight from Western materialism brought him to Japan in 1890, where he worked for an English newspaper, the Kobe Chronicle, and taught in various schools. In 1896, he began teaching English literature at Tokyo Imperial University, a position he held until 1903, and at Waseda University. Hearn married a samurai's daughter, Koizumi Setsu, became a Japanese citizen and a Buddhist and changed his name to Koizumi Yakumo. At the young age of 54, he died of a heart attack. Hearn's search for beauty and tranquility, for pleasing customs and lasting values, made him a confirmed Japanophile. His keen intellect, poetic imagination, and wonderful clear style permitted him to penetrate to the very essence of things Japanese. He became the great interpreter of things Japanese to the West. Hearn's most famous work is a collection of lectures entitled Japan: An Attempt at Interpretation (published posthumously in 1905). His other books on Japan include Glimpses of Unfamiliar Japan (1894), Out of the East (1895), Kokoro (1896), Gleanings in Buddha Fields (1897), Exotics and Retrospectives (1898), In Ghostly Japan (1899), Shadowings (1900), A Japanese Miscellany (1901), and Kwaidan (1904).

Donald Richie, novelist, essayist, journalist, and film scholar, was born in Lima, Ohio, in 1924, but has spent most of the last sixty years (except for time at Columbia University in the early 1950s and as curator of film at New York's Museum of Modern Art in 1968-73) witnessing and reporting on the transformation of Japan from postwar devastation to twenty-first century economic and cultural powerhouse. Arriving in Tokyo on New Year/s Day, 1947, he worked as a feature writer and film critic for the Pacific Stars and Stripes. After graduating from Columbia, he returned to Japan as film critic for the Japan Times. Although he is especially well known for his analysis of Japanese cinema and for his instrumental role in introducing Japanese film to the West, he is also considered the doyen of cultural observation, helping to define modern Japan and Japanese culture for Western readers while steadfastly believing that "the ostensible is the real," or what you see is what you get. He is the author of some forty books of fiction and non-fiction, dozens of speeches and essays, and hundreds of book, film, and arts reviews. Recent collections include The Donald Richie Reader: 50 Years of Writing on Japan (2001) and Japan Journals 1947-2004 (2004), based on his detailed record of his life in Japan. He still lives and writes in Tokyo.

CIN000403941
Lafcadio Hearn's Japan: An Anthology of his Writings on the Country and it's People by Lafcadio Hearn
Lafcadio Hearn
Tuttle Classics
Used - Very Good
Paperback
Tuttle Publishing
2007-10-15
224
4805308737
9784805308738
N/A
Book picture is for illustrative purposes only, actual binding, cover or edition may vary.
This is a used book - there is no escaping the fact it has been read by someone else and it will show signs of wear and previous use. Overall we expect it to be in very good condition, but if you are not entirely satisfied please get in touch with us.