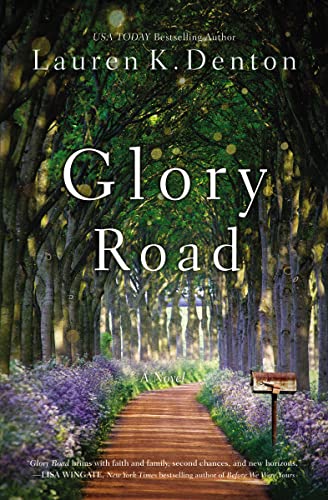 Used Price
$15.49
Free Shipping in the US
Written in Lauren Denton's signature Southern style, Glory Road tells the story of three generations of women navigating the uncertain pathways of their hearts during a summer that promises to bring change---whether they're ready for it or not.
Like New

One summer changes everything for these three Southern women.

As three generations of women navigate the uncertain paths of their hearts and futures, one summer promises to bring change-whether they're ready for it or not.

At thirty-eight, garden shop owner Jessie McBride thinks her chances for romance are years behind her and, after her failed marriage, she's fine with that. She lives contentedly with her fiery mother and her quiet, headstrong daughter. But the unexpected arrival of two men on Glory Road make her question if she's really happy with the status quo. Handsome, wealthy Sumner Tate asks her to arrange flowers for his daughter's wedding, and Jessie finds herself drawn to his continued attention. And Ben Bradley, her lingering what-could-have-been from high school days who's known her better than anyone and whom she hasn't seen in years, moves back to the red dirt road. Jessie finds her heart being pulled in directions she never expected.

Meanwhile, Jessie's fourteen-year-old daughter, Evan, is approaching the start of high school and trying to navigate a new world of identity and emotions-particularly as they relate to the cute new guy who's moved in just down the road. At the same time, Jessie's mother, Gus, increasingly finds herself forgetful and faces a potentially frightening future.

For these three strong Southern women, the roots they've planted on Glory Road will give life to the adventures waiting just around the curve.

"Brims with family, second chances, and new horizons." -Lisa Wingate, New York Times bestselling author of Before We Were Yours

"Rich colorful characters capturing my heart, combined with a story that kept me up till the wee hours, Glory Road is a perfect read. Lauren Denton has done it again!" -Lisa Patton, bestselling author of Rush and Whistlin' Dixie in a Nor'easter

"Once again Lauren Denton brings her lyrical writing and compelling characters to a story that will enthrall readers from page one." -Marybeth Mayhew Whalen, author of Only Ever Her and co-founder of She Reads, for Glory Road

'An endearing and empowering story about three generations of women who stand together no matter what.' * Woman's World *
'This sweet book about family ties exudes so much Southern charm that the scent of magnolias practically wafts from the pages.' * WORLD magazine *

LAUREN K. DENTON is the author of USA TODAY bestselling novels The Hideaway and Hurricane Season. She was born and raised in Mobile, Alabama, and now lives with her husband and two daughters in Homewood, just outside Birmingham. Though her husband tries valiantly to turn her into a mountain girl, she'd still rather be at the beach. Website: LaurenKDenton.com; Instagram: LaurenKDentonBooks; Facebook: LaurenKDentonAuthor; Twitter: @LaurenKDenton.

GOR010848423
Glory Road by Lauren K. Denton
Lauren K. Denton
Used - Like New
Paperback
Thomas Nelson Publishers
2019-03-19
368
0785219706
9780785219705
N/A
Book picture is for illustrative purposes only, actual binding, cover or edition may vary.
The book has been read, but looks new. The book cover has no visible wear, and the dust jacket is included if applicable. No missing or damaged pages, no tears, possible very minimal creasing, no underlining or highlighting of text, and no writing in the margins.