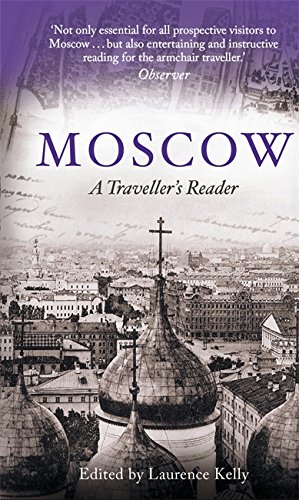 Used Price
$10.69
Free Shipping in the US
A fascinating and wide-ranging anthology, vividly evoking the life of the city in the voices of both visitors and residents through the centuries
Reviews:
Trustpilot
Very Good Good

Founded in 1147, Moscow was for much of its early history in thrall to other nations - to the Khans, the Tartars and the Poles. The city was devastated by fire time and again, but with each rebuilding, it grew ever more magnificent. For every church that was destroyed, it seemed that two more were built.

In this evocative and fascinating anthology, Moscow's turbulent growth is recorded through the voices of visitors and residents: Peter the Great's bloody reprisals after the revolt of the streltsy in 1698; a visit to the city's brothels by medical students in the 1890s; Kutuzov abandoning Moscow to Napoleon in 1812, and Napoleon's ignominious retreat from the burning city; Pushkin railing against the mindlessness of 1830 society; the flowering of literary greatness in the ninenteenth century and of the Moscow Art Theatre in the twentieth; and the dazzling profusion of jewels in the Treasury of the Kremlin.

These and many other milestones in over seven hundred years of history are brought vividly to life.

Not only essential for all prospective visitors . . . but also entertaining and instructive reading for the armchair traveller. - ObserverCould scarcely be bettered - Sunday TelegraphIndispensable - Guardian[Kelly] has in effect invented a new genre, raising compilation almost to the level of art - Observer[Kelly] has ranged widely and chosen widely - Daily Telegraph

Laurence Kelly is the editor of the Traveller's Reader series. Born in Brussels and educated at New College, Oxford, where he read history, he joined the Life Guards in 1950 and served in the Foreign Office. He is the son of a former British ambassador to Russia.

GOR009439967
Moscow: A Traveller's Reader by Laurence Kelly
Laurence Kelly
Used - Very Good
Paperback
Little, Brown Book Group
2016-06-02
352
1472137140
9781472137142
N/A
Book picture is for illustrative purposes only, actual binding, cover or edition may vary.
This is a used book - there is no escaping the fact it has been read by someone else and it will show signs of wear and previous use. Overall we expect it to be in very good condition, but if you are not entirely satisfied please get in touch with us.