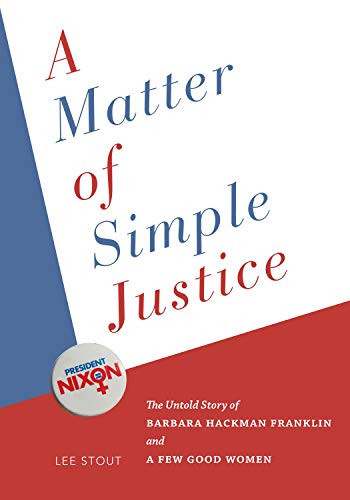 A Matter of Simple Justice
by Lee Stout

Used Price
$6,39
Free Shipping in the US

Focuses on the major role of Barbara Hackman Franklin, a staff assistant to President Nixon, in expanding opportunities for women in government and in American society in general. Shows how the Nixon administration's achievements reflected the national debate over the role of women.

A Matter of Simple Justice Summary

A Matter of Simple Justice: The Untold Story of Barbara Hackman Franklin and a Few Good Women by Lee Stout

In August 1972, Newsweek proclaimed that "the person in Washington who has done the most for the women's movement may be Richard Nixon." Today, opinions of the Nixon administration are strongly colored by foreign policy successes and the Watergate debacle. Its accomplishments in advancing the role of women in government have been largely forgotten. Based on the "A Few Good Women" oral history project at the Penn State University Libraries, A Matter of Simple Justice illuminates the administration's groundbreaking efforts to expand the role of women-and the long-term consequences for women in the American workplace.

At the forefront of these efforts was Barbara Hackman Franklin, a staff assistant to the president who was hired to recruit more women into the upper levels of the federal government. Franklin, at the direction of President Nixon, White House counselor Robert Finch, and personnel director Fred Malek, became the administration's de facto spokesperson on women's issues. She helped bring more than one hundred women into executive positions in the government and created a talent bank of more than a thousand names of qualified women. The Nixon administration expanded the numbers of women on presidential commissions and boards, changed civil service rules to open thousands more federal jobs to women, and expanded enforcement of antidiscrimination laws to include gender discrimination. Also during this time, Congress approved the Equal Rights Amendment and Nixon signed Title IX of the Education Amendments into law. The story of Barbara Hackman Franklin and those "few good women" shows how the advances that were made in this time by a Republican presidency both reflected the national debate over the role of women in society and took major steps toward equality in the workplace for women.

A Matter of Simple Justice Reviews

"The words 'untold story' always pique my interest, since those stories often contain wonderful surprises. A Matter of Simple Justice is just such a story. I am thrilled that our friend Barbara Hackman Franklin-along with President Nixon-is finally getting the credit she deserves for advancing the cause of women in the workplace."

"[This] book is important for the light it sheds on a chapter of our history that was largely overshadowed by President Nixon's fall from grace."

"The book is an educational read, and an inspirational one for women graduating from high school or college. It will remind them of what they can accomplish more easily now, thanks to their female forebears."

"A Matter of Simple Justice is an outstanding resource for information on women and politics in the 1970s, a window into the extensive oral history resources housed at Penn State, and a source for the background and chronology of women's political history since World War II."

"Every great movement and advancement in society is built upon a foundation of courageous, passionate, and tireless leaders. A Matter of Simple Justice is a fascinating look at a tipping-point moment in American history and the visionaries, like Barbara Hackman Franklin, who helped create it. It is a timely read as we journey into a decade of unprecedented opportunity for women's leadership in business, government, and civil society all around the world."

"Each generation produces visionary pioneers who recognize existing injustices and strive to change them. A Matter of Simple Justice chronicles how-with the leadership of one of these pioneers, Barbara Hackman Franklin-my father and the Nixon administration were instrumental in opening doors previously closed to women. Thanks to their efforts, women have made enormous contributions to our nation in government, business, the military, academics, sports, and medicine."

"A Matter of Simple Justice recounts a momentous chapter in women's history: namely, the efforts to advance the role of women in government. As an eyewitness to those exciting times, I saw many women breaking through barriers, earning jobs never before held by women, and establishing successful careers. I am delighted that this important story has been told at last."

"Many younger people may not realize what a significant cultural change in women's rights began with Nixon, and I hope they will find it an illuminating bit of history."

Lee Stout is Librarian Emeritus at the Penn State University Libraries. His recent book Ice Cream U: The Story of the Nation's Most Successful Collegiate Creamery (2009) is also distributed by Penn State Press.

introduction: The Question and the Answer

2. Women's Appointments and the President's Task Force on Women's Rights and Responsibilities

3. Setting the Stage for a Program

4. Calling Barbara Franklin: The Initiative Is Under Way

5. The Women's Program Meets Its Goals

part 2 A Few Good Women in Their Own Words

6. Recounting Early Infl uences and the Special Role of

Women in the Legal Profession

8. Considering Networking, the President, and the Impact of the Women's Program

CIN000112196
A Matter of Simple Justice: The Untold Story of Barbara Hackman Franklin and a Few Good Women by Lee Stout
Lee Stout
Used - Very Good
Hardback
Pennsylvania State University Press
2012-02-24
248
0983947805
9780983947806
N/A
Book picture is for illustrative purposes only, actual binding, cover or edition may vary.
This is a used book - there is no escaping the fact it has been read by someone else and it will show signs of wear and previous use. Overall we expect it to be in very good condition, but if you are not entirely satisfied please get in touch with us.