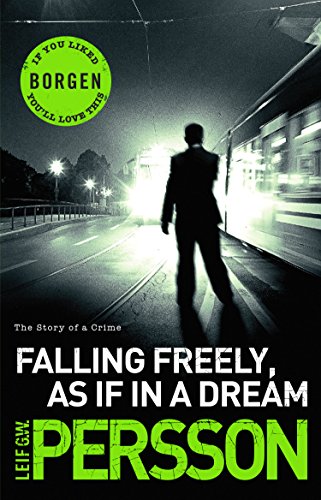 Falling Freely, as If in a Dream
by Leif G W Persson

Used Price
$13.99
Free Shipping in the US
From the grand master of Scandinavian crime fiction-and one of the best crime writers of our time-a new critically acclaimed novel centered around the unsolved murder of Swedish Prime Minister Olof Palme in 1986.
Reviews:
Trustpilot
Very Good Good

Falling Freely, as If in a Dream Summary

Falling Freely, as If in a Dream: (The Story of a Crime 3) by Leif G W Persson

From the grand master of Scandinavian crime fiction-and one of the best crime writers of our time-a new critically acclaimed novel centered around the unsolved murder of Swedish Prime Minister Olof Palme in 1986. It's August 2007, and Lars Martin Johansson, chief of the National Bureau of Criminal Investigation in Sweden has opened the files on the unsolved murder of Prime Minister Olof Palme. With his retirement quickly closing in, Johansson forms a new group comprised of a few trustworthy detectives who doggedly wade through mountains of paperwork and pursue new leads in a case that has all but gone cold despite the open wound the assassination has left on the consciousness of Swedish society. Yet the closer the group gets to the truth, the more Johansson compromises the greater good for personal gain, becoming a pawn for the private vendetta of a shady political spin doctor. Sharply detailed and boldly plotted, Persson's work lifts the veil on one of history's greatest unsolved crimes in a novel that goes toe-to-toe with the best of true crime books. Shortlisted for the 2015 Petrona Award and the 2015 CWA International Dagger

Customer Reviews - Falling Freely, as If in a Dream

Falling Freely, as If in a Dream Reviews

"Clever and sophisticated...Has the feel of a real investigation, carried out by convincing characters and shedding new light on this most perplexing of crimes" -- Joan Smith * Sunday Times *
"Similar to Ellroy in his American Underworld trilogy, this criminologist and author weaves together reality and fiction when he lets a group of honest cops once again scrutinize millions of documents to investigate the murder case. As the conspiracy theory develops the confusion grows. Brilliant." * Le Parisien *
"There's plenty of life in Nordic Noir as Persson reminds us. British writers who complain about the attention given to the Scandinavians should pick this up and see why that is" -- Barry Forshaw * Financial Times *
"As well as being an intricately detailed cirme scenario, this is a powerful state-of-the-nation novel. Audacious narrative strategies are par for the course for the award-winning Scandicrims novelist Leif Persson" * Good Book Guide *

Leif G.W. Persson is Scandinavia's most renowned criminologist and a leading psychological profiler. He has also served as an advisor to the Swedish Ministry of Justice. Since 1991, he has held the position of Professor at the National Swedish Police Board and is regularly consulted as the country's foremost expert on crime. He is the author of ten bestselling crime novels including The Dying Detective which won both the Swedish Academy of Crime Writers' Award for Best Crime Novel of 2010 and The Glass Key for Best Scandinavian Crime Novel of 2010. During his career Persson has been the recipient of many other prestigious awards including The Piraten Award, The Swedish Academy of Crime Writers' Award (which he has won three times), The Finnish Whodunnit Society's Annual Award for Excellence in Foreign Crime Writing, The Petrona Award for Best Scandinavian Crime Novel, and The Danish Academy of Crime Writers' Palle Rosenkrantz Prize.

GOR006496387
Falling Freely, as If in a Dream: (The Story of a Crime 3) by Leif G W Persson
Leif G W Persson
The Story of a Crime
Used - Very Good
Paperback
Transworld Publishers Ltd
2015-02-26
720
0552774707
9780552774703
Short-listed for CWA International Dagger 2015
Book picture is for illustrative purposes only, actual binding, cover or edition may vary.
This is a used book - there is no escaping the fact it has been read by someone else and it will show signs of wear and previous use. Overall we expect it to be in very good condition, but if you are not entirely satisfied please get in touch with us.