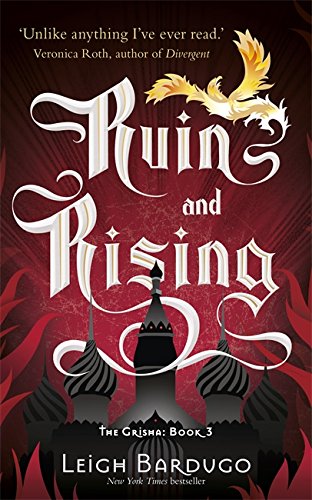 The Grisha: Ruin and Rising
by Leigh Bardugo

Used Price
$9.99
Free Shipping in the US
Enter the Grishaverse with Book One of the Shadow and Bone Trilogy by the number one New York Times-bestselling author of Six of Crows and Crooked Kingdom. Perfect for fans of Laini Taylor and Sarah J. Maas.
Reviews:
Trustpilot
Very Good

The Grisha: Ruin and Rising Summary

The Grisha: Ruin and Rising: Book 3 by Leigh Bardugo

Enter the Grishaverse with Book One of the Shadow and Bone Trilogy by the number one New York Times-bestselling author of Six of Crows and Crooked Kingdom. Perfect for fans of Laini Taylor and Sarah J. Maas.

Soldier. Summoner. Saint.The nation's fate rests with a broken Sun Summoner, a disgraced tracker, and the shattered remnants of a once-great magical army.

The Darkling rules from his shadow throne while a weakened Alina Starkov recovers from their battle under the dubious protection of the zealots who worship her as a Saint. Now her hopes lie with the magic of a long-vanished ancient creature and the chance that an outlaw prince still survives.

As her allies and enemies race toward war, only Alina stands between her country and a rising tide of darkness that could destroy the world. To win this fight, she must seize a legend's power - but claiming the firebird may be her ruin.

Praise for the Grishaverse:

"Utterly, extremely bewitching." The Guardian
"There's a level of emotional and historical sophistication within Bardugo's original epic fantasy that sets it apart." Vanity Fair
"Unlike anything I've ever read." Veronica Roth, bestselling author of Divergent
"This is a great choice for teenage fans of George R.R. Martin and J.R.R. Tolkien." RT Book Reviews

Read all the books in the Grishaverse!

The Language of Thorns: Midnight Tales and Dangerous Magic

The Grisha: Ruin and Rising Reviews

In this absolutely STUNNING (I don't know what else to call it) conclusion to the New York Times Bestselling Trilogy, everything you know about this world and the things in it will change. Love, loyalty, friendship, survival, power, victory, and freedom - everything is at stake. And one broken saint, a disgraced tracker, and a whole gang of misfits and a prince without a throne are all that stands between light and dark. If you choose not to read this, you are missing out on one of the BEST series ever. The ending was absolutely stunning, the finale heart-breaking, the story so realistic. I'm actually going to need time to process what I've just read - READ IT! * The Guardian Online *
What an amazing ride the Grisha series has been! Brilliant, classic high fantasy on one hand and yet unique and unpredictable on the other. So many twists that I did not in the slightest see coming, and which developed or resolved situations perfectly. Genius storytelling revealing complete mastery of poor defenceless reader emotions as well as fabulous world-building and skillfull character development. Such a satisfying ending too - no mean feat to pull off, but she did it. If you're hesitating to finish this trilogy for fear it could let you down, stop messing about right now and get on with it. * Thoughts From The Hearthfire *
... an excellent end to one of the best trilogies I've read for a while. Hugely enjoyable reading. * The Book Bag *
... the final episode of the powerful and all-consuming The Grisha sequence -- Julia Eccleshare * Love Reading *
Ruin and Rising left me teary-eyed and contented. I didn't want to leave these characters and yet it just felt SO right. Everything came together and was revealed and resolved and it was just a perfect and beautiful ending and I couldn't have wished for anything more. Leigh certainly delivered. It did the series justice and lived up to its previous two books spectacularly. Thank you so much for sharing Alina's adventure Leigh. I, and many others I'm sure, are extremely grateful. Without a doubt: 5 stars! -- Laura137 * Guardian Teen Books *
A captivating and endlessly exhilarating story that knows no limits. Ruin and Rising is the breathtaking conclusion to the dark fantasy trilogy Shadow and Bone. This story has everything that you never imagined you would want and makes it even better than you could ever fathom. If you have not considered the books or haven't heard of them then I strongly recommend you do because they will fast become your favorite books. * Falling Books *
It's difficult to put the beauty of this series into words, as it has to be read in its entirety to be fully appreciated. The careful weaving of magic, fantasy and fairytale comes to a close with a finale that feels like the perfect ending for all involved. There are surprises galore and more than a few emotional, heart-wrenching moments, as the loose ends are tied up with graceful finesse. I cannot praise this series highly enough, so don't be deterred by the YA genre tag - it truly does appeal to all ages. * Book Chick City *
Praise for Leigh Bardugo: I was away on the ships and wandering through Ravka with Alina and Mal, I was on the receiving end of his kisses and his annoyances. I felt the sun warm the pages whenever Alina summoned and I felt the fear when The Darkling was around. There is nothing I don't love about the world in which the Grisha trilogy is set and I cannot wait until next year to see how this series is going to conclude. * Readaraptor *
Praise for Leigh Bardugo:Leigh is a writer of the best kind because she loves her characters and the world they live in and makes a reader jealous that they can't visit it. There is magic in these pages. * Sister Spooky *

Praise for Leigh Bardugo: I wrote a piece here gushing about why the Grisha series is so different and so special. There are many small reasons that all come together to create the awesomeness. But there are also many more that I can't even explain. Maybe it is different because it is just magic. It has the most exquisitely constructed world, the best-written characters, the most amazing writing and storyline. And it always always always leaves me desperate for more. It always leaves me aching, foaming at the mouth, for more: right now. And that, perhaps, is why it is so special. It is magic. It is beautiful. It is perfect.
Well, except for that cliffhanger. How am I meant to make it a whole year with that hanging over my head?!

* The Book-Addicted Girl *
Praise for Leigh Bardugo: Leigh Bardugo, you sure know how to involve your readers and make them an emotional wreck. Siege and Storm is an enthralling sequel that seriously ups the game and expectations of the reader. It is written so beautifully that is flows flawlessly while keeping the magic alive in the readers mind. If you want to read a fantasy series that has a truly unique world then read this series. * Read and Write and Read Some More *
Praise for Leigh Bardugo:...a strong and satisfying sequel solidifying my belief that The Grisha Trilogy will go down as one of my favourite series of all time. * Jess Hearts Books *
Praise for the Grisha trilogy: It is one of those series which as a YA reader is a must read. It is series which grabs hold of you by the neck and wrings every emotion out until you are a blabbering, quivering, drooling mess on your sofa. It is high fantasy at its best and I can guarantee that you will not regret picking up this book. * Escapism *

Leigh Bardugo is the number one New York Times bestselling author fantasy novels and the creator of the Grishaverse. With over one million copies sold, her Grishaverse spans the Shadow and Bone trilogy, the Six of Crows duology and The Language of Thorns. She was born in Jerusalem, grew up in Los Angeles, graduated from Yale University, and has worked in advertising, journalism, and most recently, makeup and special effects. These days, she lives and writes in Hollywood, where she can occasionally be heard singing with her band. Find her website at www.leighbardugo.com and follow her on Twitter @lbardugo.

GOR006730026
The Grisha: Ruin and Rising: Book 3 by Leigh Bardugo
Leigh Bardugo
The Grisha
Used - Very Good
Paperback
Hachette Children's Group
2015-06-04
384
1780621841
9781780621845
N/A
Book picture is for illustrative purposes only, actual binding, cover or edition may vary.
This is a used book - there is no escaping the fact it has been read by someone else and it will show signs of wear and previous use. Overall we expect it to be in very good condition, but if you are not entirely satisfied please get in touch with us.