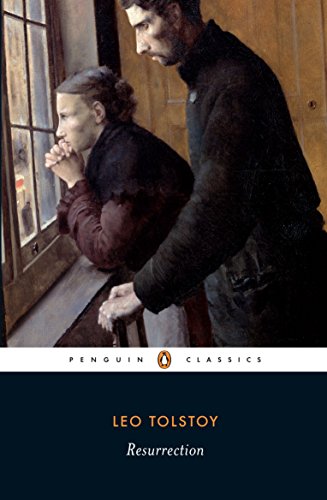 Used Price
$13.99
Free Shipping in the US
Tells the story of a nobleman's attempt to redeem the suffering his youthful philandering inflicted on a peasant girl who ends up a prisoner in Siberia. This title describes the social life in Russia at the end of the nineteenth century.
Reviews:
Trustpilot
Very Good

Leo Tolstoy's last completed novel, Resurrection is an intimate, psychological tale of guilt, anger and forgiveness, translated from the Russian with an introduction and notes by Anthony Briggs in Penguin Classics.

Serving on the jury at a murder trial, Prince Dmitri Nekhlyudov is devastated when he sees the prisoner - Katyusha, a young maid he seduced and abandoned years before. As Dmitri faces the consequences of his actions, he decides to give up his life of wealth and luxury to devote himself to rescuing Katyusha, even if it means following her into exile in Siberia. But can a man truly find redemption by saving another person? Tolstoy's most controversial novel, Resurrection (1899) is a scathing indictment of injustice, corruption and hypocrisy at all levels of society. Creating a vast panorama of Russian life, from peasants to aristocrats, bureaucrats to convicts, it reveals Tolstoy's magnificent storytelling powers.

Anthony Briggs' superb new translation preserves Tolstoy's gripping realism and satirical humour. In his introduction, Briggs discusses the true story behind Resurrection, Tolstoy's political and religious reasons for writing the novel, his gift for characterization and the compelling psychological portrait of Dmitri. This edition also includes a chronology, notes and a summary of chapters.

Leo Tolstoy (1828-1910) spent his youth in wasteful idleness until 1851, when he travelled to the Caucasus and joined the army with his older brother, fighting in the Crimean war. After marrying in 1862, Tolstoy settled down, managing his estates and writing two of his best-known novels, War and Peace (1869) and Anna Karenina (1878). A Confession (1879-82) marked a spiritual crisis in his life, and in 1901 he was excommunicated by the Russian Holy Synod. He died in 1910, in the course of a dramatic flight from home, at the small railway station of Astapovo.

Count Leo Tolstoy was born on September 9, 1828, in Yasnaya Polyana, Russia. In 1862, Tolstoy married Sophie Behrs, a marriage that was to become, for him, bitterly unhappy. His diary, started in 1847, was used for self-study and self-criticism; it served as the source from which he drew much of the material that appeared not only in his great novels War and Peace (1869) and Anna Karenina (1877), but also in his shorter works. Seeking religious justification for his life, Tolstoy evolved a new Christianity based upon his own interpretation of the Gospels. He died at the age of eighty-two on November 20, 1910.

Anthony Briggs has written, translated or edited many books and articles on Russian and English literature. A leading authority on Alexander Pushkin, he has also edited five volumes of English poetry. His recent translation of War and Peace has been widely acclaimed.

GOR001600964
Resurrection by Leo Tolstoy
Leo Tolstoy
Used - Very Good
Paperback
Penguin Books Ltd
2009-08-27
560
0140424636
9780140424638
N/A
Book picture is for illustrative purposes only, actual binding, cover or edition may vary.
This is a used book - there is no escaping the fact it has been read by someone else and it will show signs of wear and previous use. Overall we expect it to be in very good condition, but if you are not entirely satisfied please get in touch with us.