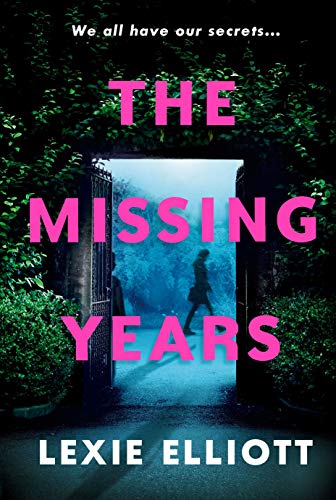 The Missing Years
by Lexie Elliott

Used Price
$9,99
Free Shipping in the US
A woman's chilling family history comes back to haunt her in this captivating thriller set in the foothills of the Scottish Highlands.
Reviews:
Trustpilot
Very Good Good

The Missing Years by Lexie Elliott

A Goodreads 'Mover and Shaker' for summer 2019

The French Girl captivated readers with a twisting tale of psychological suspense. Now author Lexie Elliott heads to the foothills of the Scottish Highlands, where a woman's tangled family history comes back to haunt her...

She thought she would never go back...

Ailsa Calder has inherited half of a house. The other half belongs to a man who disappeared without a trace twenty-seven years ago. Her father.

Leaving London behind to settle her mother's estate, Ailsa returns to her childhood home nestled amongst the craggy peaks of the Scottish Highlands, accompanied by the half-sister she's never taken the time to get to know.

With the past threatening to swallow her whole, she can't escape the claustrophobic feeling that the house itself is watching her. And when Ailsa confronts the first nighttime intruder, she sees that the manor's careless rugged beauty could cost her everything...

Like The French Girl, this manages to be both uncannily creepy and grounded in the true horror of human evil. * The Observer *
Elliott follows her well-reviewed debut, The French Girl, with an equally atmospheric novel that keeps the reader intrigued and off-balance all the way through. * Booklist *
This compelling mystery left me on the edge of my seat... If you liked the author's debut work The French Girl, you will love The Missing Years. * Tulsa Book Review *
With its growing atmosphere of dread and its moody environs, The Missing Years begins with a Gothic hint that rapidly segues into a suspenseful thriller with a breathless twist of a denouement. * New York Journal of Books *
A maelstrom of complicated friendships and shifting alliances. This addictive debut will keep you up late into the night! * Karen Dionne, author of The Marsh King's Daughter on The French Girl *
A gripping mystery... tangled relationships, shifting perceptions, and the memories - and people - that haunt us. I was completely captivated from beginning to end. * Megan Miranda, New York Times bestselling author of The Perfect Stranger on The French Girl *
You'll be well-served to carve out a lofty chunk of time for this tangled mystery, as The French Girl demands a one-sit read. * Mail Online on The French Girl *

Lexie Elliott grew up in Scotland, at the foot of the Highlands. She graduated from Oxford University, where she obtained a doctorate in theoretical physics. A keen sportswoman, she works in fund management in London, where she lives with her husband and two sons. The rest of her time is spent writing, or thinking about writing, and juggling family life and sport. www.lexieelliott.com

GOR009879797
The Missing Years by Lexie Elliott
Lexie Elliott
Used - Very Good
Paperback
Atlantic Books
2019-05-06
384
1786495570
9781786495570
N/A
Book picture is for illustrative purposes only, actual binding, cover or edition may vary.
This is a used book - there is no escaping the fact it has been read by someone else and it will show signs of wear and previous use. Overall we expect it to be in very good condition, but if you are not entirely satisfied please get in touch with us.