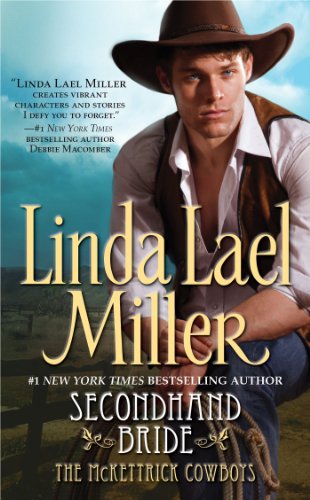 In Stock
$11.99
Third book in the McKettrick series, to win his father's ranch, a hard-living cowboy settles down and takes a wife -- another man's wife!
Very Good Good
Only 2 left

The youngest McKettrick brother, Jeb, is the wild one who never could stay out of trouble. And trouble is what he gets when he proposes to Chloe Wakefield. No sooner had he and the pretty schoolteacher tied the knot than Jeb discovers she's already married! After a major dustup with Chloe in a Tombstone barroom, an irate Jeb heads back to the Triple M Ranch, certain that his chances of winning the spread in a marriage race with his brothers are dashed.

Now Chloe has come to Indian Rock, hoping to find her beloved uncle John and a much-needed teaching post. But when she unexpectedly crosses paths with Jeb, her rage -- and passion -- flare even stronger than back in Tombstone. Chloe never intended to mislead Jeb about her previous marriage to a scoundrel of a man. But when she finds out Jeb needs a bride and a baby in order to inherit the Triple M, she is livid. Learning to trust will be the hardest part of this mixed-up marriage -- until a stagecoach robbery and the return of a dangerous stranger prove to Jeb and Chloe that they need each other to love and honour as long as they both shall live.

The daughter of a town marshal, Linda Lael Miller is a #1 New York Times and USA TODAY bestselling author of more than one hundred historical and contemporary novels, most of which reflect her love of the West. Raised in Northport, Washington, Linda pursued her wanderlust, living in London and Arizona and traveling the world before returning to the state of her birth to settle down on a horse property outside Spokane. Published since 1983, Linda was awarded the prestigious Nora Roberts Lifetime Achievement Award in 2007 by the Romance Writers of America. She was recently inducted into the Wild West Heritage Foundation's Walk of Fame for her dedication to preserving the heritage of the Wild West. When not writing, Linda loves to focus her creativity on a wide variety of art projects. Visit her online at LindaLaelMiller.com and Facebook.com/OfficialLindaLaelMiller.

GOR002664447
Secondhand Bride by Linda Lael Miller
Linda Lael Miller
McKettrick Cowboys
Used - Very Good
Paperback
Simon & Schuster
2011-12-08
448
0743422759
9780743422758
N/A
Book picture is for illustrative purposes only, actual binding, cover or edition may vary.
The book has been read but remains in clean condition. All pages are intact and the cover is intact. Some minor wear to the spine.