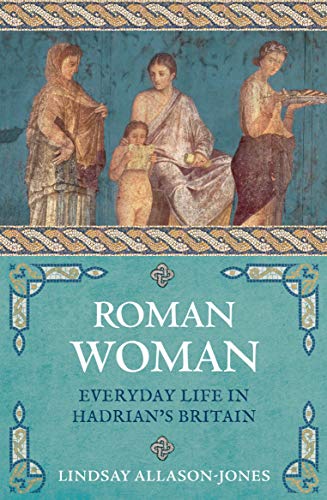 Used Price
$11.99
Free Shipping in the US
Roman Woman is a vivid portrayal of life in Roman Britain; in this fascinating, authentically detailed, deftly woven narrative, a family struggles to come to terms with new customs and to reconcile their cultural differences.
Reviews:
Trustpilot
Very Good

Roman Britain is vividly portrayed in this fascinating and authentically detailed story about a year in the life of an ordinary woman and her family.

The year is AD 133. Hadrian is Emperor of Rome and all its vast empire, including Britannia. The greater part of that island has long been under imperial rule and the Roman legions control most of the land, quelling uprisings and building new forts and towns. Around the fortress of Eboracum (now known as York), a bustling garrison settlement is developing, while along the north-west frontier of Hadrian's empire, the legions are completing the construction of a mighty wall.

Introducing us to this world is Senovara, born into the Parisi, a local tribe whose customs have been little changed by Roman rule. But she is also the young wife of Quintus, a veteran of the 6th Legion Victrix. Settling in Quintus's home is both bewildering and awe-inspiring for Senovara as she seeks to adjust to Eboracum's cosmopolitan environment, come to terms with new customs and reconcile their cultural differences.

Senovara finds that daily life in the settlement can be harsh; a constant struggle to provide her family with fresh food, water and warmth. Yet there is much enjoyment to be had as well, at the public baths or with new friends. There is also the excitement of religious festivals and in the regular news from the frontier, and peril in the form of a deadly fever which sweeps through Eboracum, forcing Senovara and her children to flee to her brother in the countryside.

Roman Woman is an immersive, compelling narrative which gets to the heart of what life was like for everyday people in Roman Britain.

Lindsay Allason-Jones was Director of the Centre for Interdisciplinary Artefact Studies and Reader in Roman Material Culture at Newcastle University until she retired in 2011, having previously been Director of Archaeological Museums for the University, responsible for the Museum of Antiquities and the Shefton Museum of Greek Art and Archaeology.

Her research into Roman artefacts and Roman women has led to her working across the Roman Empire, particularly in North Africa and the Middle East. She is a Trustee of several of the Hadrian's Wall museums and serves on the Board of Management of the Great North Museum. She is currently Chair of the Marc Fitch Fund and President of the Border Archaeological Society as well as Visiting Fellow at Newcastle University.

CIN000456125
Roman Woman: Everyday Life in Hadrian's Britain by Lindsay Allason-Jones
Lindsay Allason-Jones
Used - Very Good
Paperback
Michael O'Mara Books Ltd
2019-07-11
336
1789290740
9781789290745
N/A
Book picture is for illustrative purposes only, actual binding, cover or edition may vary.
This is a used book - there is no escaping the fact it has been read by someone else and it will show signs of wear and previous use. Overall we expect it to be in very good condition, but if you are not entirely satisfied please get in touch with us.