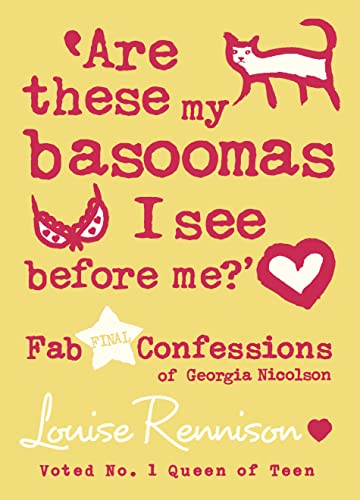 Are these my basoomas I see before me?
by Louise Rennison

Ohmygiddygodspyjamas! The tenth marvy book in the Confessions of Georgia Nicolson is here! Get ready to laugh like a loon on loon tablets.

Are these my basoomas I see before me? Summary

Are these my basoomas I see before me? (Confessions of Georgia Nicolson, Book 10) by Louise Rennison

Ohmygiddygodspyjamas! The tenth marvy book in the Confessions of Georgia Nicolson is here! Get ready to laugh like a loon on loon tablets.

It's the FINAL instalment of Georgia's fab and hilarious diary!

Does Georgia escape the cakeshop of luuurve?

Can there be more heartbreaknosity in store?

Will the Sex God pop up again unexpectedly (oo-er)!

And what about the supreme accidental snogmaster Dave the Laugh?

Will she FINALLY choose her only one and only?

So many boys, so little time...

Are these my basoomas I see before me? Reviews

"Either these books make you chortle like a loon in loon pants or you live on another planet" Nicolette Jones, Sunday Times

Praise for `...startled by his furry shorts!'

`The only snag about taking this on holiday is that it won't last long: it will be consumed without a break except for the snorting noises. But it can always be passed on to parents by any youngster who can stand the sound of Vati's and Mutti's snorts, or dipped into repeatedly because every line is vair vair funny.' Sunday Times
Praise for `...startled by his furry shorts.':

GOR001221788
Are these my basoomas I see before me? (Confessions of Georgia Nicolson, Book 10) by Louise Rennison
Louise Rennison
Confessions of Georgia Nicolson
Used - Very Good
Hardback
HarperCollins Publishers
2009-06-25
288
0007277334
9780007277339
N/A
Book picture is for illustrative purposes only, actual binding, cover or edition may vary.
This is a used book - there is no escaping the fact it has been read by someone else and it will show signs of wear and previous use. Overall we expect it to be in very good condition, but if you are not entirely satisfied please get in touch with us.