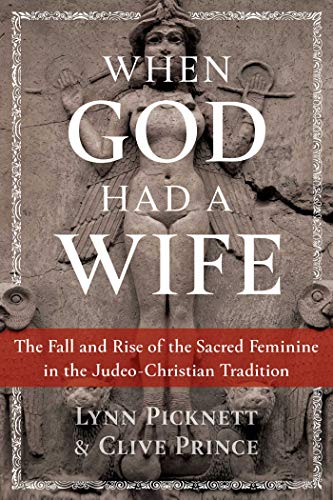 When God Had a Wife
by Lynn Picknett

Used Price
$18.49
Free Shipping in the US
Reveals the tradition of goddess worship in early Judaism and how Jesus attempted to restore the feminine side of the faith.
Reviews:
Trustpilot
Very Good

When God Had a Wife Summary

When God Had a Wife: The Fall and Rise of the Sacred Feminine in the Judeo-Christian Tradition by Lynn Picknett

* Provides historical and archaeological evidence for an earlier form of Hebrew worship with both male and female gods, including a 20th-century discovery of a Hebrew temple dedicated to both Yahweh and the warrior goddess Anat

* Explores the Hebrew pantheon of goddesses, including Yahweh's wife, Asherah, goddess of fertility and childbirth

* Shows how both Jesus and his great rival Simon Magus were attempting to restore the ancient, goddess-worshipping religion of the Israelites

Despite what Jews and Christians--and indeed most people--believe, the ancient Israelites venerated several deities besides the Old Testament god Yahweh, including the goddess Asherah, Yahweh's wife, who was worshipped openly in the Jerusalem Temple. After the reforms of King Josiah and Prophet Jeremiah, the religion recognized Yahweh alone, and history was rewritten to make it appear that it had always been that way. The worship of Asherah and other goddesses was now heresy, and so the status of women was downgraded and they were blamed for God's wrath.

However, as Lynn Picknett and Clive Prince reveal, the spiritual legacy of the Jewish goddesses and the Sacred Feminine lives on. Drawing on historical research, they examine how goddess worship thrived in early Judaism and included a pantheon of goddesses. They share new evidence for an earlier form of Hebrew worship that prayed to both male and female gods, including a 20th-century archaeological discovery of a Hebrew temple dedicated to both Yahweh and the goddess Anat. Uncovering the Sacred Feminine in early Christianity, the authors show how, in the first century AD, both Jesus and his great rival, Simon Magus, were attempting to restore the goddess-worshipping religion of the Israelites. The authors reveal how both men accorded great honor to the women they adored and who traveled with them as priestesses, Jesus's Mary Magdalene and Simon's Helen. But, as had happened centuries before, the Church rewrote history to erase the feminine side of the faith, deliberately ignoring Jesus's real message and again condemning women to marginalization and worse.

Providing all the necessary evidence to restore the goddess to both Judaism and Christianity, Picknett and Prince expose the disastrous consequences of the suppression of the feminine from these two great religions and reveal how we have been collectively and instinctively craving the return of the Sacred Feminine for millennia.

Customer Reviews - When God Had a Wife

When God Had a Wife Reviews

"A book that blows the lid off one of the most ancient cover-ups in the world--the existence of a feminine deity every bit as important as the masculine Yahweh. This is a book that all should read--it is powerful, thought-provoking, and wonderfully contentious. The scholarship of the writers is evident on every page. So read on and be prepared to be astounded and diverted. Your world may never look the same again." * John Matthews, coauthor of Temples of the Grail and The Lost Book of the Grail *
"Lynn Picknett and Clive Prince are two of the most important history writers of modern times. They build a compelling case for the veneration of the goddess alongside the religion of Yahweh among the ancient Israelites and how its persistence lingered through to the age of Jesus. A page-turning read from start to finish." * Andrew Collins, author of The Cygnus Key and Goebekli Tepe *
"Picknett and Prince, long known for profoundly unsettling religious and historical revelations, have excelled themselves with this story of the little-known Israelite goddesses--their rise, fall, and, unexpectedly, their rise again. But now we are also faced with another deeply uncomfortable cover-up--that of the priestesses who celebrated the goddess even from within Christ's own circle. A major book and a gripping read." * Graham Phillips, author of The Virgin Mary Conspiracy *
"What I like about this book is the referencing to external scholarship and the clarity of presentation. The finding of an 8th-century-BCE inscription at Kuntillet Ajrud, read as 'Yahwe (God) and his Ashera,' supports the authors' contention that God had a consort." * Robert Feather, author of The Secret Initiation of Jesus at Qumran *
"Picknett and Prince have put together a tour de force of argument and research in three of the seven chapters for anyone pursuing the truth about the divine feminine in the Judeo-Christian tradition. I would judge When God Had a Wife to be landmark study of the history of religion." * Scott S. Smith, author of Extraordinary People: Real Life Lessons on What it Takes to Achieve Succes *
"This book is chock full of great history, amazing research, great messages, and intriguing writing. All devotees of religion in modern times ought to read it because of its exemplary research, revelation of ugly, uncomfortable truths we ALL need to accept, and its celebration of the once, present, and future goddesses who history and the patriarchy could not silence , and never will." * Saoirse, PaganPages.org *
"When God had a Wife is a well-researched book, depending almost entirely for its arguments (if not all of its conclusions) on the scholarship of academics." * Jay Vickers, Fortean Times Magazine *
"The emergence of the church as a patriarchal authoritarian and political institution in the fourth century played a critical role, but the orthodox view of Jesus has in my view been overturned by the Gnostic Gospels, from which a new and more balanced picture emerges. I believe that we are now ready as a culture for a fully fledged sacred feminine that embraces all of its aspects. When God Had a Wife is an important contribution to this process." * David Lorimer, Paradigm Explorer Journal *

Since 1989, Lynn Picknett and Clive Prince have researched historical and religious mysteries, authoring such bestsellers as The Stargate Conspiracy and The Templar Revelation, which directly inspired The Da Vinci Code. Frequent speakers at conferences around the world, they regularly appear on TV series such as Forbidden History, History's Ultimate Spies, and Medieval Murder Mysteries. Lynn lives in Surrey, UK, and Clive lives in London.

INTRODUCTION
Bringing Her Back Home

4 Goddesses to Be Reckoned With

7 Jesus and His Goddess

GOR010804787
When God Had a Wife: The Fall and Rise of the Sacred Feminine in the Judeo-Christian Tradition by Lynn Picknett
Lynn Picknett
Used - Very Good
Paperback
Inner Traditions Bear and Company
2020-01-01
336
1591433703
9781591433705
N/A
Book picture is for illustrative purposes only, actual binding, cover or edition may vary.
This is a used book - there is no escaping the fact it has been read by someone else and it will show signs of wear and previous use. Overall we expect it to be in very good condition, but if you are not entirely satisfied please get in touch with us.