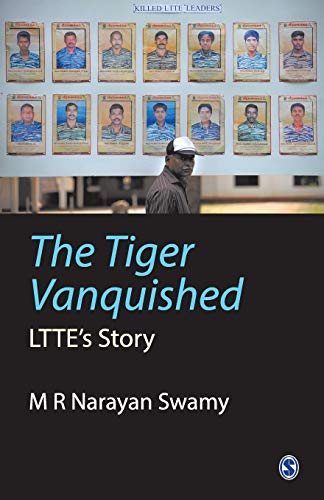 Used Price
$25,99
Free Shipping in the US
Tells the story of why the Liberation Tigers of Tamil Eelam (LTTE) lost the war that it had always dreamt of winning in Sri Lanka. This title offers a collection of news stories and commentaries penned by the author from 2003 to 2009 on the ethnic conflict in the country.
Reviews:
Trustpilot
Very Good

This book tells the story of why the Liberation Tigers of Tamil Eelam (LTTE) lost the war that they had always dreamt of winning in Sri Lanka. It is a collection of news stories and commentaries penned by the author from 2003 to 2009 on the ethnic conflict in the country. Each piece is provided with an introduction that places it in the context in which it was written. The unfolding of the drama is brought about through conversations with Sri Lankan leaders, Tamil activists, Indian officials, Norwegian and other diplomats, human rights activists, former LTTE guerrillas and civilians.

The Tiger Vanquished: LTTE's Story provides a detailed account of the critical years when Sri Lanka's internationally backed peace process slowly led to a vicious war that the LTTE decisively lost. The introduction provides previously unpublished information, including India`s covert involvement in the Norwegian-sponsored peace process and the silent war that the Indian intelligence waged against the LTTTE. Also, among other things, an inside account of what went wrong with the Tigers is given by two young women who served in the LTTE.

It is an essential read for anyone trying to get his intellectual keel on extremist philosophy. At a time when even the most pacifist of thinkers cannot imagine a world without a war between `good' and `evil' , and `civilization' and `medievalism' , it is good to read about a group that started it all.

The Tiger Vanquished comes as a fitting finale of a trilogy that can be rated as the finest collective reference guide to the devastating three-decade-long war in Sri Lanka's north and east.

The book is a well researched study of the rise and decline of Prabhakaran and his Tamil Tigers.

A graduate of Delhi University, M R Narayan Swamy took to journalism in 1978. He began his career with the United News of India (UNI), a premier Indian news agency. After over eight years, he switched over to the French international news agency AFP where he served for more than 13 years. And after a stint in Singapore, he returned to India and joined the IANS news agency in 2001, where he is now the Executive Editor. Narayan Swamy is the author of two previous and path-breaking books on Sri Lanka. The first, Tigers of Lanka (1994), details the origins and growth of Tamil militancy, including India's overt and covert involvement. The second, Inside an Elusive Mind (2003), is the only biography--albeit unauthorized--of the now dead LTTE chief, Velupillai Prabhakaran. Both books are considered a must read for all those trying to understand Tamil militancy in Sri Lanka.

GOR005207128
The Tiger Vanquished: LTTE's Story by M R Narayan Swamy
M R Narayan Swamy
Used - Very Good
Paperback
SAGE Publications India Pvt Ltd
2010-05-17
276
8132104595
9788132104599
N/A
Book picture is for illustrative purposes only, actual binding, cover or edition may vary.
This is a used book - there is no escaping the fact it has been read by someone else and it will show signs of wear and previous use. Overall we expect it to be in very good condition, but if you are not entirely satisfied please get in touch with us.