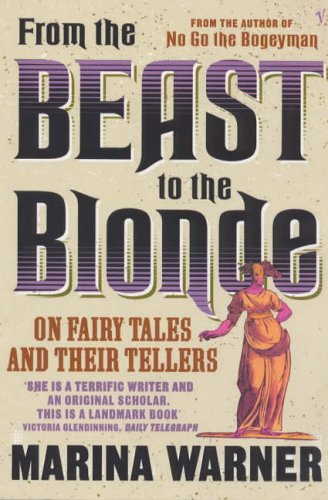 From The Beast To The Blonde
by Marina Warner

In Stock
$26.99
Entrancing, multi-layered and as wittily subversive as fairy tales themselves, this beautifully illustrated work explores and illuminates the unfolding history of famous fairy tales and the contexts in which they flourished.
Like New
Only 1 left

From The Beast To The Blonde Summary

From The Beast To The Blonde: On Fairy Tales and Their Tellers by Marina Warner

Entrancing, multi-layered and as wittily subversive as fairy tales themselves, this beautifully illustrated work explores and illuminates the unfolding history of famous fairy tales and the contexts in which they flourished. It also lifts the curtain on the tellers themselves - from ancient sibyls and old crones to the more modern Angela Carter and, of course, Walt Disney. A brilliant compendium of folklore, fairytales and learning which reveals unexpected links and histories behind some of our oldest and most-loved tales.

From The Beast To The Blonde Reviews

"Can itself evoke the sense of startled wonder that these tales first gave us" -- Laurel Graeber * New York Times *
"She is a terrific writer and an original scholar. This is a landmark book" -- Victoria Glendinning * Daily Telegraph *
"Just like the tale-tellers she celebrates...she's a weaver of enchantments, each sentence is like a silken knot charming you further into her web of meanings" -- Michelle Roberts * Independent on Sunday *
"Consistently enlightening...this is a brilliant work: wise, witty and as magisterially omniscient as any Sibylline oracle" -- Nicholas Tucker * New Statesman and Society *
"Open the book at almost any page and you will find something to fascinate you" -- Noel Malcolm * Guardian *

Marina Warner spent her early years in Cairo, and was educated at a convent in Berkshire, and then in Brussels and London, before studying modern languages at Oxford. She is an internationally acclaimed cultural historian, critic, novelist and short story writer. From her early books on the Virgin Mary and Joan of Arc, to her bestselling studies of fairy tales and folk stories, From the Beast to the Blonde, No Go the Bogeyman and Stranger Magic, her work has explored different figures in myth and fairy tale and the art and literature they have inspired. She lectures widely in Europe, the United States and the Middle East, and is currently Professor in the Department of Literature, Film and Theatre Studies, University of Essex. She was appointed CBE in 2008.

GOR008419140
From The Beast To The Blonde: On Fairy Tales and Their Tellers by Marina Warner
Marina Warner
Used - Like New
Paperback
Vintage Publishing
1995-09-07
480
0099479516
9780099479512
N/A
Book picture is for illustrative purposes only, actual binding, cover or edition may vary.
The book has been read, but looks new. The book cover has no visible wear, and the dust jacket is included if applicable. No missing or damaged pages, no tears, possible very minimal creasing, no underlining or highlighting of text, and no writing in the margins.