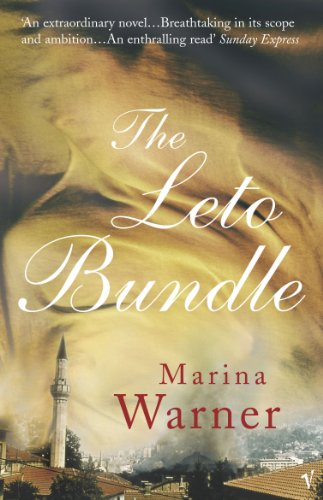 The Leto Bundle
by Marina Warner

In Stock
$6.99
When a mummy in the Museum of Albion is unpacked it is found to contain a bundle of curious objects and documents which tell of the wanderings of an unknown woman, Leto.
Very Good Good
Only 1 left

The Leto Bundle by Marina Warner

When a mummy in the Museum of Albion is unpacked it is found to contain a bundle of curious objects and documents which tell of the wanderings of an unknown woman, Leto. On the run, in a far-off era of civil strife, Leto gives birth to twins, shelters with wolves, survives in a desert stronghold as the lover of its commander, stows away on a ship loaded with plundered antiquities and then works as a maid in a war-torn city. She loses her son but saves her daughter during a long siege. As the novel sweeps from mythological times and the Middle Ages to the treasure-hunting of Victorian Europe and into the present day, Leto reappears in different guises. Eventually she becomes a servant to a rock singer, and begins to search for her son.

"A rewarding, incisive and topical novel" * Sunday Express *
"Stimulating... vivid... a fascinating debate about the nature of mythology" * Financial Times *
"A compelling and erudite meditation on exiles, refugees, loss and the search for a home. A timely, ambitious and inventive novel, which blends a reflection on Europe's past and present traumas with rare story-telling verve" * Scotland on Sunday *
"Warner brilliantly communicates the kaleidoscope of cultures, tribes and nationalities encountered by Leto on her epic journey. Driven by a mystery that keeps the reader guessing to the final pages... Beautifully written, the language rich and sensuous, with a seductive range of references... Tremendous fun" * Literary Review *

Marina Warner spent her early years in Cairo, and was educated at a convent in Berkshire, and then in Brussels and London, before studying modern languages at Oxford. She is an internationally acclaimed cultural historian, critic, novelist and short story writer. From her early books on the Virgin Mary and Joan of Arc, to her bestselling studies of fairy tales and folk stories, From the Beast to the Blonde and No Go the Bogeyman, her work has explored different figures in myth and fairy tale and the art and literature they have inspired. She lectures widely in Europe, the United States and the Middle East, and is currently Professor in the Department of Literature, Film and Theatre Studies, University of Essex. She was appointed CBE in 2008. www.marinawarner.com

GOR001226407
The Leto Bundle by Marina Warner
Marina Warner
Used - Very Good
Paperback
Vintage Publishing
2002-02-07
416
0099284650
9780099284659
N/A
Book picture is for illustrative purposes only, actual binding, cover or edition may vary.
This is a used book - there is no escaping the fact it has been read by someone else and it will show signs of wear and previous use. Overall we expect it to be in very good condition, but if you are not entirely satisfied please get in touch with us.