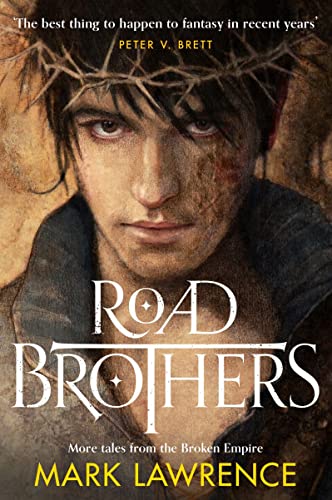 A volume of short stories by the bestselling author of THE BROKEN EMPIRE series, Mark Lawrence

A volume of short stories by the bestselling author of THE BROKEN EMPIRE series, Mark Lawrence

This is a collection of fourteen stories of murder, mayhem, pathos, and philosophy, all set in the world of the Broken Empire.

Within these pages, you will find tales of men such as Red Kent, Sir Makin, Rike, Burlow and the Nuban, telling of their origins and the events that forged them. There is Jorg himself, striding the page as a child of six, as a teenage wanderer and as a young king. And then there is a tale about Prince Jalan Kendeth - liar, cheat, womaniser and coward.

To the new reader, welcome to a lawless world where wit and sword are the most useful weapons, and danger lurks as much in candle-lit palaces as in dark alleys and dense woodland. To those who have already journeyed with Jorg, we hope you will enjoy renewing old acquaintances with your favourite characters.

`Excellent - on a par with George R.R. Martin'
Conn Iggulden

`Lawrence's poetic prose is amazing, far and away the best of the modern fantasy authors'
Peter V. Brett

`Lawrence improves with every book he writes . . . we may have to turn the ratings system up to eleven'
Starburst Magazine

`Lawrence gets better with each book he writes'
Myke Cole

Mark Lawrence was born in Champaign-Urbana, Illinois, to British parents but moved to the UK at the age of one. He went back to the US after taking a PhD in mathematics at Imperial College to work on a variety of research projects including the `Star Wars' missile defence programme. Returning to the UK, he has worked mainly on image processing and decision/reasoning theory. He says he never had any ambition to be a writer so was very surprised when a half-hearted attempt to find an agent turned into a global publishing deal overnight. His first trilogy, The Broken Empire, has been universally acclaimed as a ground-breaking work of fantasy, and both The Liar's Key and The Wheel of Osheim have won the Gemmell Legend award for best fantasy novel. Mark is married, with four children, and lives in Bristol.

GOR009527646
Road Brothers by Mark Lawrence
Mark Lawrence
Used - Very Good
Paperback
HarperCollins Publishers
2017-11-02
288
0008267898
9780008267896
N/A
Book picture is for illustrative purposes only, actual binding, cover or edition may vary.
This is a used book - there is no escaping the fact it has been read by someone else and it will show signs of wear and previous use. Overall we expect it to be in very good condition, but if you are not entirely satisfied please get in touch with us.