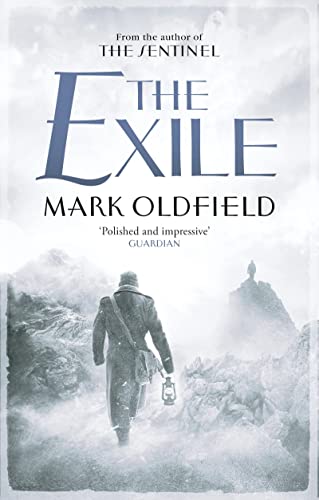 The Exile
by Mark Oldfield

The sequel to THE SENTINEL. The critically acclaimed journey into the dark heart of Spain continues.

The Exile by Mark Oldfield

San Sebastian, 1954: Comandante Guzman, Franco's one-time favourite secret policeman is out of favour and exiled to the Basque country. Guzman was last here during the war, heading a platoon of bloodthirsty irregulars. He'd rather forget that. But, up in the hills, he'll find he hasn't been forgotten at all.

Madrid, 2010: Forensic Investigator Ana Maria Galindez has been sent to the Basque country, where three skeletons have been found in a sealed cellar. In the debris surrounding them she finds a scimitar, stamped with a name: Capitan Leopoldo Guzman.

'Superbly told, and with a fine villain at its heart, this is a remarkable first thriller' Daily Mail.
'A powerful, hypnotic debut novel filled with the horror of conflict, treachery, and intrigue, it's a must-read' NYJ Books.
'We should expect great things from the Vengeance of Memory trilogy' Bookgeeks.co.uk.
'The story is very well written and the anti-hero is strangely likeable as he sticks rigidly to his principles. The twist at the end suggests that a sequel will follow shortly and it's eagerly anticipated' Best Selling Crime Thrillers.
'Clever plotting, fast action and compelling characters in an unusual setting make this thriller very readable' Mystery People.

Mark Oldfield was born in Sheffield, and now lives in Kent. He holds a PhD in criminology.

GOR007099758
The Exile by Mark Oldfield
Mark Oldfield
Vengeance of Memory
Used - Very Good
Hardback
Head of Zeus
2015-09-10
592
1781851514
9781781851517
N/A
Book picture is for illustrative purposes only, actual binding, cover or edition may vary.
This is a used book - there is no escaping the fact it has been read by someone else and it will show signs of wear and previous use. Overall we expect it to be in very good condition, but if you are not entirely satisfied please get in touch with us.