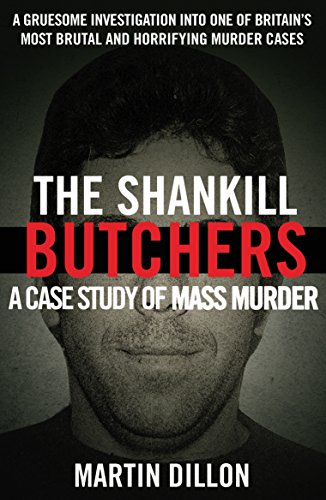 The Shankill Butchers
by Martin Dillon

In Stock
11,39 $
'This was the ultimate way to kill a man' During the 1970s a group of Protestant paramilitaries embarked on a spree of indiscriminate murder which left thirty Northern Irish Catholics dead.
Very Good Good
21 in stock

The Shankill Butchers: A Case Study of Mass Murder by Martin Dillon

'This was the ultimate way to kill a man' During the 1970s a group of Protestant paramilitaries embarked on a spree of indiscriminate murder which left thirty Northern Irish Catholics dead. Their leader was Lenny Murphy, a fanatical Unionist whose Catholic-sounding surname led to his persecution as a child for which he took revenge on all Catholics. Not for the squeamish, The Shankill Butchers is a horrifying detailed account of one of the most brutal series of murders in British legal history - a phenomenon whose real nature has been obscured by the troubled and violent context from which it sprang.

"Gruesome yet compelling and superbly researched" * Tribune *
"Gruesome territory...the great value of Martin Dillon's carefully researched and readable work is that it enters a world that few journalists have been inclined or able to penetrate" * Listener *
"Mr. Dillon recounts in chilling detail the evolution of Murphy's gang and the efforts to catch them. It makes for gripping but altogether terrifying reading" * Washington Times *
"A chilling book, chilling but fascinating ... People on both sides - or some of them - are likely to read Martin Dillon, and to learn from him" -- Conor Cruise O'Brien
"Dillon's books are a working lifetime's brave and persistent effort to get information of a kind which, as he frankly says, can be perilous to possess, let alone to reveal" -- Times Literary Supplement

Martin Dillon is a native of Belfast although educated in England. He lived in France for a time and returned to Northern Ireland to work as a journalist with the Irish News before joining the Belfast Telegraph. He also worked as a freelance journalist for several national newspapers and American periodicals. In 1973 he wrote Political Murder in Northern Ireland which is regarded as the definitive study of political assassination in Northern Ireland. His second book, Rogue Warrior of the SAS, is a biography of the Second World War hero, Lt. Col. Robert Blair Mayne, and is published by Arrow. The Shankill Butchers which was a bestseller in both Ireland and Britain was the first in his trilogy of books about Northern and Southern Ireland. Martin Dillon has written plays for BBC radio and television and has been Editor in Northern Ireland of many of the BBC's programmes in the area of current affairs. He now works for the BBC History Unit in London.

GOR001224630
The Shankill Butchers: A Case Study of Mass Murder by Martin Dillon
Martin Dillon
Used - Very Good
Paperback
Cornerstone
1990-07-19
416
0099738104
9780099738107
N/A
Book picture is for illustrative purposes only, actual binding, cover or edition may vary.
This is a used book - there is no escaping the fact it has been read by someone else and it will show signs of wear and previous use. Overall we expect it to be in very good condition, but if you are not entirely satisfied please get in touch with us.