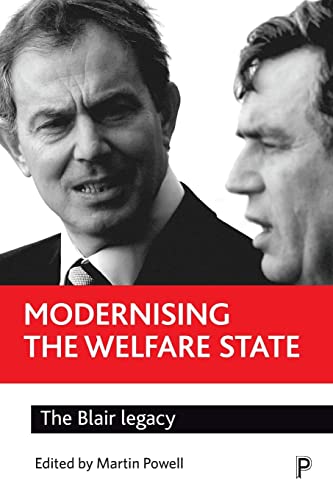 Used Price
$11.39
Free Shipping in the US
This book, the third in Martin Powell's New Labour trilogy, analyses the legacy of Tony Blair's government for social policy, focusing on the extent to which it has changed the UK welfare state.
Reviews:
Trustpilot
Good

Modernising the welfare state: The Blair legacy by Martin Powell

Tony Blair was the longest serving Labour Prime Minister in British history. This book, the third in a trilogy of books on New Labour edited by Martin Powell, analyses the legacy of his government for social policy, focusing on the extent to which it has changed the UK welfare state. Drawing on both conceptual and empirical evidence, the book offers forward-looking speculation on emerging and future welfare issues. The book's high-profile contributors examine the content and extent of change. They explore which of the elements of modernisation matter for their area. Which sectors saw the greatest degree of change? Do terms such as 'modern welfare state' or 'social investment state' have any resonance? They also examine change over time with reference to the terms of the government. Was reform a fairly continuous event, or was it concentrated in certain periods? Finally, the contributors give an assessment of likely policy direction under a future Labour or Conservative government. Previous books in the trilogy are "New Labour, new welfare state?" (1999) and "Evaluating New Labour's welfare reforms" (2002) (see below). The works should be read by academics, undergraduates and post-graduates on courses in social policy, public policy and political science.

"This book builds on the established reputation of Powell's previous two collections on the Blair governments. It will be eagerly awaited by students looking for an informed and comprehensive analysis of Labour's achievements over the last decade." Pete Alcock, Professor of Social Policy and Administration, University of Birmingham
"For anyone who wants to understand welfare under New Labour and future directions for the welfare state this book is recommended. It is an up-to-date, authoritative and informative explanation of change." Luke Martell, Reader in Sociology, University of Sussex

Martin Powell is Professor of Health and Social Policy at the Health Services Management Centre, University of Birmingham.

GOR010810466
Modernising the welfare state: The Blair legacy by Martin Powell
Martin Powell
Used - Good
Paperback
Policy Press
2008-09-26
304
1847420397
9781847420398
N/A
Book picture is for illustrative purposes only, actual binding, cover or edition may vary.
The book has been read but remains in clean condition. All pages are intact and the cover is intact. Some minor wear to the spine.