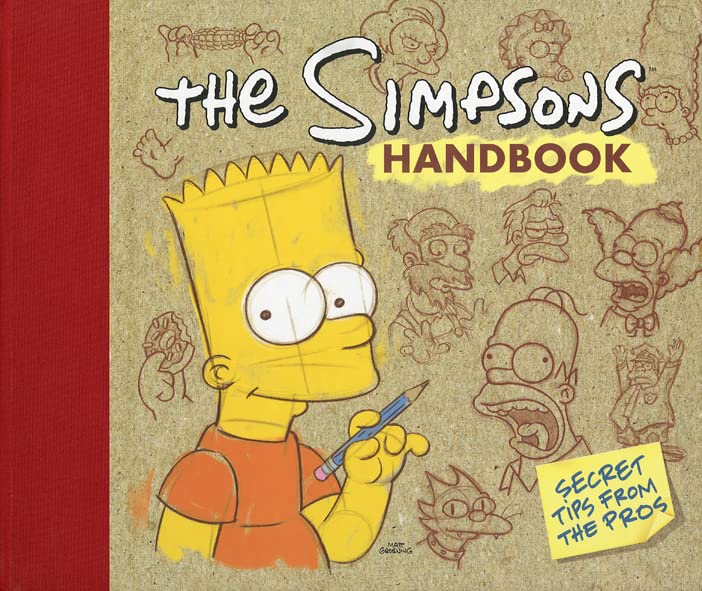 The Simpsons Handbook
by Matt Groening

A beautifully produced full-colour art book showing how the characters and settings from the Simpsons Movie and TV series are drawn, painted and turned into the world's most popular and enduring comedy show.

A beautifully produced full-colour art book showing how the characters and settings from the Simpsons Movie and TV series are drawn, painted and turned into the world's most popular and enduring comedy show.

From lines and circles to richly hand drawn characters,The Simpsons Handbook is an homage to hand drawn animation and might just have you drawing like the pros in no time at all.

Here is a rare homage to the art of classic 2-D animation and the time-honoured method of hand-drawing characters that come alive on the silver screen.

The creator of "The Simpsons" and "Futurama" reveals the art of brilliant character design, backgrounds and prop art in this lavishly detailed handbook that unveils the complex secrets behind the deceptively simple and universally loved Simpsons characters.

With creative insights, artists' sketches, helpful insider hints and step-by-step instructions, enter the imagination of "master doodler" Matt Groening and receive some professional "how-to" advice from many of the animators and directors who have made "The Simpsons" the longest-running animated show and situation comedy in television history.

In our technological era when animation has become increasingly digitalised,this unique handbook records the genesis of some of the most extraordinary examples of the art of hand-drawn character animation.

Praise for The Simpsons: 'One is speechless in the face of their genius' Nicholas Lezard, Guardian 'Fact: The Simpsons is the funniest sitcom of all time. There are more gags, more characters, funnier plots, funnier sub-plots' Loaded 'It is likely to get very high ratings on terrestrial television; Britain is probably heading for a wave of Simpsons mania' Independent On Sunday 'The wittiest and most literate show on television' Brenda Maddox, The Times

Matt Groening is the creator of Life in Hell, The Simpsons and Futurama, all published by HarperCollins.

GOR001953150
The Simpsons Handbook (The Simpsons) by Matt Groening
Matt Groening
The Simpsons
Used - Very Good
Hardback
HarperCollins Publishers
2007-01-01
144
0007254946
9780007254941
N/A
Book picture is for illustrative purposes only, actual binding, cover or edition may vary.
This is a used book - there is no escaping the fact it has been read by someone else and it will show signs of wear and previous use. Overall we expect it to be in very good condition, but if you are not entirely satisfied please get in touch with us.