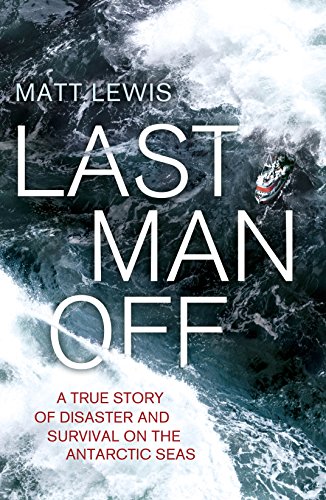 Last Man Off
by Matt Lewis

Last Man Off: A True Story of Disaster and Survival on the Antarctic Seas by Matt Lewis

In the depths of Antarctic winter, hundreds of miles from land or rescue, a small fishing boat is swallowed by waves as high as houses.

The captain is fatally slow to act, and then paralyzed by fear. The officers flee for their lives. Only the actions of Matt Lewis, a 23-year-old British marine biologist and one of the most inexperienced men aboard, will save the lives of the South African crew.

Lewis is the last man off the sinking boat, and leads the escape onto three life rafts. There the battle for survival begins.

This is brilliant . . Told with terrifying detail and heartfelt compassion -- Dermot O'Leary
A story that reminds us of the unforgiving nature of the sea and the courage that lies within the everyday heroes that have found themselves in hell -- Bear Grylls
A dramatic tale of survival in one of the most brutal situations on earth. Feels like reading the diary of a doomed man . . . so personal and chillingly real; totally takes you there in a way that is not always comfortable -- Steve Backshall
Reads like a sinister version of The Perfect Storm...Thrilling, compelling, unsettling, rewarding . . . This breakneck race of a book isn't just required reading for fans of waterborne peril; Harvard MBAs could also scour the pages as a case study in dysfunctional workplaces and woeful man management. It's like the Perfect Storm, but with gruesomely, even murderously, imperfect people * Sunday Times *
A heart-thumping tale of tragedy and survival - minus the Hollywood ending * Daily Telegraph *
A thrilling, horrifying and compelling portrait of human survival. Colossal terror unfolds on every page * The Bookseller, Books of the Year *
For his compelling account of the hardships of fishing in remote Antarctic waters, and of what it means to abandon ship in a severe storm with inadequate equipment and a crew unprepared for survival. The book is objective but non-judgmental in its descriptiveness, so heightening the true sense of disaster. The style makes the book accessible to a wide public, but it is also essential reading for seafarers, fishermen and yachtsmen, as it concerns attitudes to safety and survival. A truly life-affirming and influential work. * The Mountbatten Maritime Award for best literary contribution - Certificate of Merit *

Matt Lewis was born in Bristol, England, in 1974. He trained as a marine biologist first at Bangor University and then at Aberdeen University. He now lives with his wife and two children in Aberdeen. Last Man Off is Matt's first book.

GOR007177587
Last Man Off: A True Story of Disaster and Survival on the Antarctic Seas by Matt Lewis
Matt Lewis
Used - Very Good
Paperback
Penguin Books Ltd
2014-07-10
256
0241002796
9780241002797
N/A
Book picture is for illustrative purposes only, actual binding, cover or edition may vary.
The book has been read but remains in clean condition. All pages are intact and the cover is intact. Some minor wear to the spine.