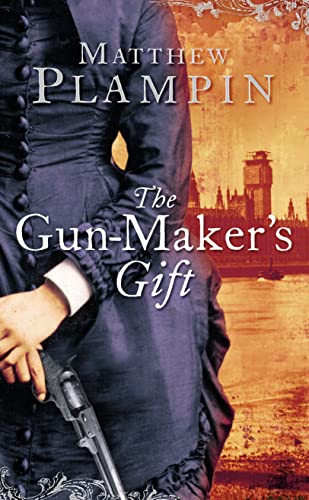 The Gun-Maker's Gift
by Matthew Plampin

A novel of intrigue, violence and conflicted loyalties from the author of The Street Philosopher.

The Gun-Maker's Gift by Matthew Plampin

A novel of intrigue, violence and conflicted loyalties from the author of The Street Philosopher.

Spring, 1853. After a triumphant display at the Great Exhibition in London, the legendary American entrepreneur and inventor Colonel Samuel Colt expands his gun-making business into England. He acquires a riverside warehouse in Pimlico and sets about converting it into a pistol works capable of mass producing his patented revolvers on an unprecedented scale - aware that the prospect of war with Russia means huge profits.

The young, ambitious Edward Lowry is hired by Colt to act as his London secretary. Although initially impressed by the Colonel's dynamic approach to his trade, Edward comes to suspect that the American's intentions in the Metropolis are not all they appear.

Meanwhile, the secretary becomes romantically involved with Caroline Knox, a headstrong woman from the machine floor - who he discovers is caught up in a plot to steal revolvers from the factory's stores. Among the workforce Colt has gathered from the seething mass of London's poor are a gang of desperate Irish immigrants, embittered refugees from the potato famine, who intend to use these stolen six-shooters for a political assassination in the name of revenge. As pistols start to go missing, divided loyalties and hidden agendas make the gun-maker's factory the setting for a tense story of intrigue, betrayal and murder.

Praise for THE STREET PHILOSOPHER:

`A galloping good story' The Times

`Lust, avarice, envy, revenge all play their part in this brilliantly told, well-paced story, which also begs the question, so relevant today, of just how close to action journalists and recorders of war should be allowed' Daily Mail

`Plampin's historical research is impressive, as is his command of detail....his true gift of descriptive power'
Independent on Sunday

Matthew Plampin was born in 1975 and grew up in Essex. He read English and History of Art at the University of Birmingham and then completed a PhD at the Courtauld Institute of Art, London. He now lectures on nineteenth-century art and architecture. The Street Philosopher was his first novel, and The Gun-Maker's Gift is his second novel.

GOR001905278
The Gun-Maker's Gift by Matthew Plampin
Matthew Plampin
Used - Very Good
Hardback
HarperCollins Publishers
2010-02-18
416
0007273967
9780007273966
N/A
Book picture is for illustrative purposes only, actual binding, cover or edition may vary.
This is a used book - there is no escaping the fact it has been read by someone else and it will show signs of wear and previous use. Overall we expect it to be in very good condition, but if you are not entirely satisfied please get in touch with us.